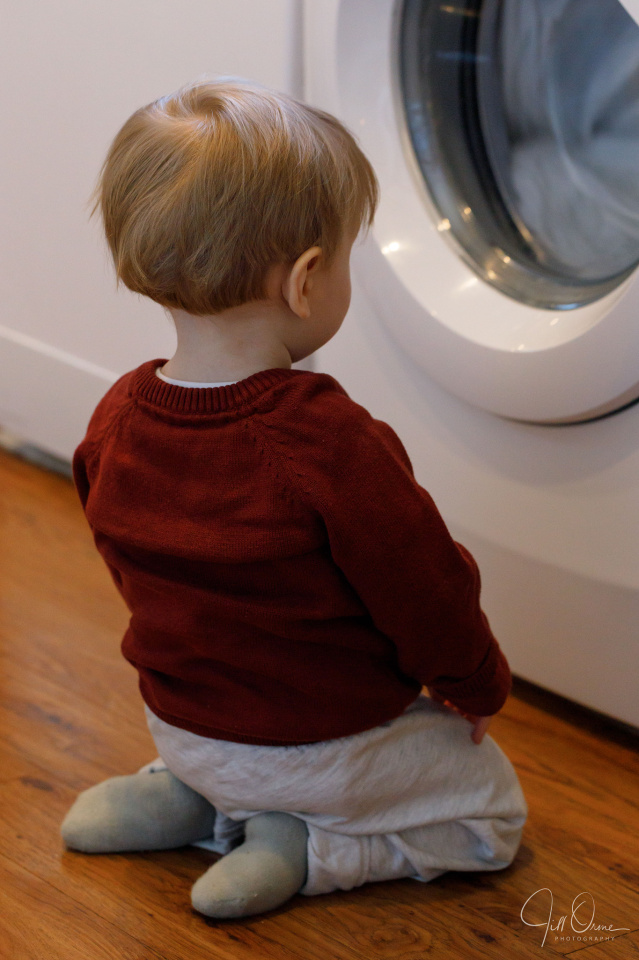 The Family B were all suffering from a bad cold today, which R and I have every expectation that we’ll be getting as well in two or three days time. Patient Zero appears to have been Baby B, judging from the fact that he’s emerged sufficiently to have at least recovered his appetite, but he’s also teething, and was unusually fractious and hard to please.

Having been denied his grandparent’s phones and glasses, his mother’s laptop, and the remote control for the television, being allowed to play with my camera in only a very limited and specific way, and tiring of flinging every toy he was offered to the other side of the room, the poor child was reduced to entertaining himself by watching the clothes agitating in the washing machine. I was trying to imagine him in a few years time, explaining to a younger generation that they don’t know how lucky they are because back in his day, etc., etc….. but I couldn’t get it to come out in anything other than a Yorkshire accent, whereas B’s will almost certainly be Welsh.

Despite all his trials and tribulations today, the Boy Wonder did do one thing that had R and me applauding like a couple of trained seals: while the grownups were idly debating whether or not it was time to give him some lunch, he settled the question by crawling at high speed across the kitchen, stopping in front of his high chair, pointing at it, and making a kind of “Wurrawurrawurra” noise, like an exasperated Tigger. We were very impressed, and he received his lunch in short order.