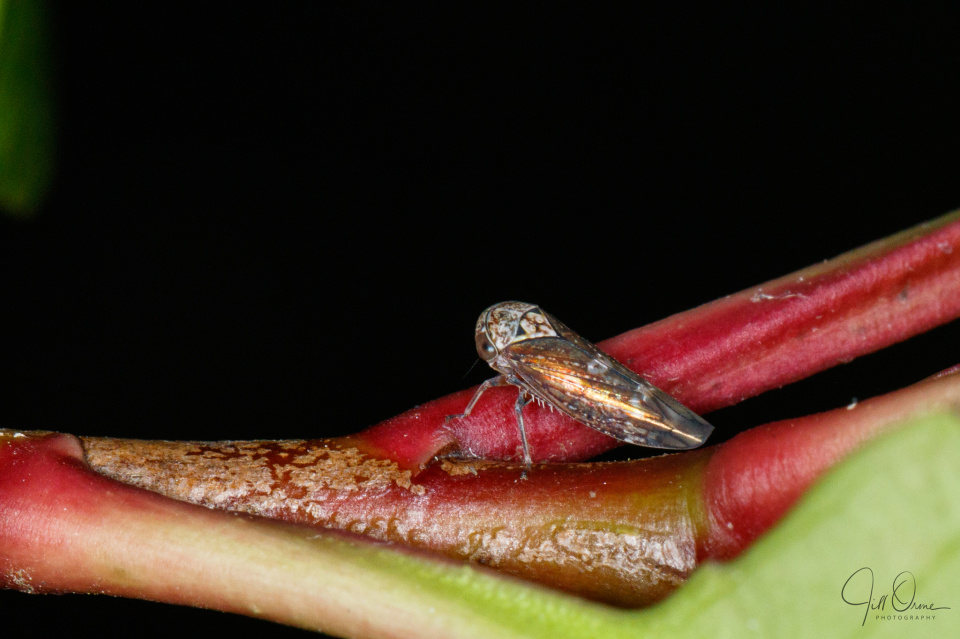 I feel guilty every time I do this – though not guilty enough to stop, obviously. I was searching the photinia for birch catkin bugs when I caught sight of this leafhopper, which was trying to edge round to the back of the bud, out of my eye line, and it promptly became my mission for the day to photograph the poor terrified creature.

It wasn’t easy, because the hopper – though clearly too cold to either leap or fly – was able to shuffle around the stem faster than I could track it and focus the macro, but in the end I worked out a strategy, which was to use the camera with my right hand, keeping my thumb on the back focus button, while I slowly bent the stem with my left hand and tried to catch my victim unawares. After five minutes of this I was toadally zorsted, and the leafhopper looked as if it was about to have an attack of the vapours, but I was pretty sure I had some usable images, so I thanked it and wished it good afternoon, and left. On my way back to the house I found myself doing a little Crash Bandicoot dance, so I hope that none of the neighbours was watching.

I’ve spent far longer this evening trying to identify the little chap than I did taking its photo, and I’m still not absolutely convinced I’ve got it right, but I think it’s a worn or poorly marked Acericerus ribauti. According to the Auchenorrhyncha Recording Scheme for Britain and Ireland, this leafhopper was first recorded in 2007, but it’s unclear whether the it’s a recent colonist or has been resident in Britain for some time. It’s very similar to another species called Acericerus vittifrons, with both feeding on Acers, especially sycamore and field maple, and as they’re difficult to tell apart A. ribauti may have been overlooked in the past.

My new friend is about 6mm long, which makes it just a smidge smaller than the Allygus modestus I found – also on the photinia – about a month ago. Both of them are bigger and chunkier than the bugs I was actually looking for today, but which I failed to find: after several weeks of gathering on the photinia buds in increasing numbers, the birch catkin bugs have suddenly departed en masse. I hope and expect that they’ve found somewhere more sheltered to overwinter.