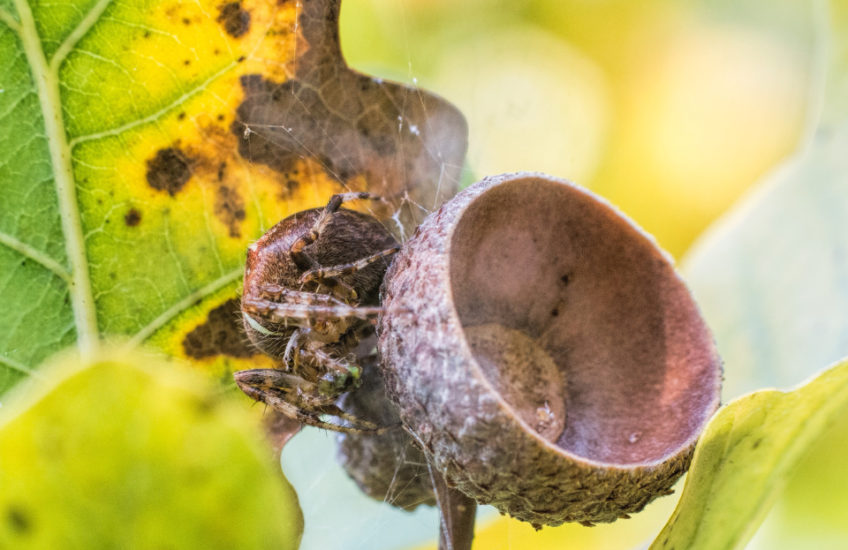 It was a lovely day today, and despite the chaos needing to be sorted out in my computer system and my study I felt the need to make the most of it – so I took a good walk around the garden, looking for bugs and such.

I’ve photographed this spider before, either sitting on the acorn which has now dropped or out in the middle of its web, and when I spotted it today it was on the web, eating something. I took quite a few photos from this angle, but I still can’t work out what the unfortunate prey was – I think possibly a green shield bug nymph, but too much of the evidence had already been consumed by the time I arrived for me to be sure.

What was clear was that the spider was not happy about being approached while it was eating, and after a few seconds it retreated to the acorn cup to complete its meal. It was much darker there and I had to push up the ISO, so while overall this was my favourite shot of this series, the image was quite noisy even before I faffed around with it to try to bring out the detail. For the record, I was using the 70D, and a 31mm extension tube on the 85mm lens.

Many thanks to jensphotos for hosting Tiny Tuesday this month – though I say that through gritted teeth: it simply isn’t fair that someone who takes such gorgeous landscape shots is also so good at macro. And she’s on afternoon tea terms with Holly and Frida….

Oh – for those of you who are glued to the saga of my Mac, it only took me the rest of the day to get my photos and raw files copied over from the PC, and Lightroom 6 working more or less properly from my old LR5 catalogue file. So that’s all good.

Less good: the Photos app on the Mac – what is THAT all about? It has completely ignored my immaculate dated catalogue structure, and just dumped all the photos in a soup of its own devising. Not pleased. Not pleased AT ALL……