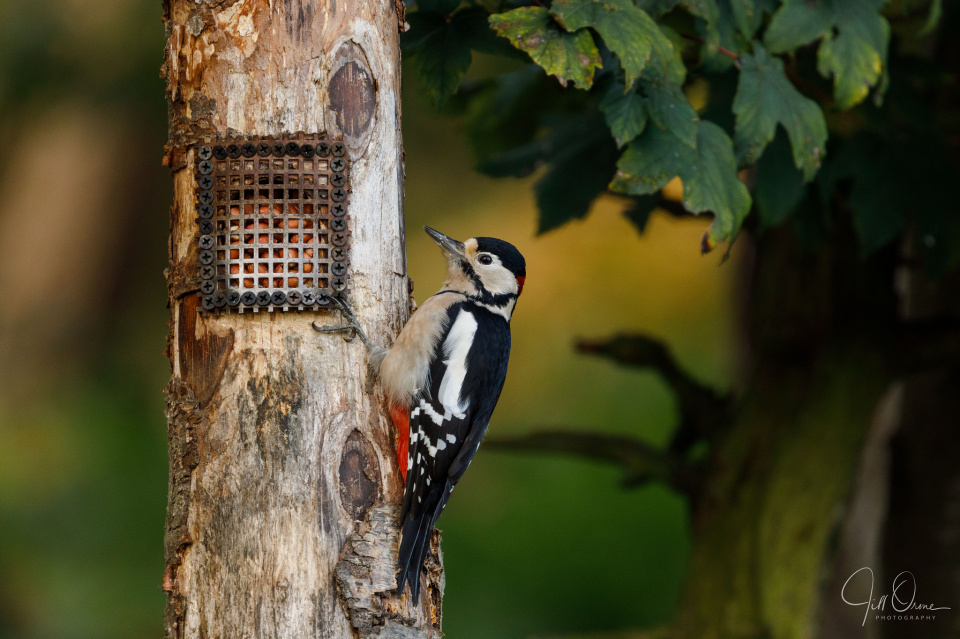 “A woodpecker over there!” hissed the little girl sitting next to me in Hiller’s bird hide this afternoon, She was about eight, and already a competent photographer – I predict that she’ll be very good indeed in a few years, if she maintains her interest in wildlife. She and her mother (also a photographer) had apparently been there for much of the day, with a break for lunch and thawing out, and told me that they’d seen some fawns earlier, though these had left before I arrived, and sadly didn’t come back.

I’d been stuck at home enduring torture by piano tuning, and by the time I was able to leave the house the afternoon was wearing on and the light was dimming, so I’d rushed to the nearest place where I thought I could reliably predict getting a photo. Unfortunately not all the children – and adults – who crowded into the hide across the hour and a half I was there had the patience and stillness of my new colleague, which meant that the birds were skittish and not inclined to come too close, so even though it’s a feeder shot I was glad of this woodpecker. But Hillers is a popular place, and they actively encourage families to use the hide, so you have to expect school holidays to be less productive of good photos than other, quieter times.

I love the plumage of a great spotted woodpecker – they’re so dramatic, in their art deco black, white, and red. I like the pair of feathers that look like the tails of an evening coat, and the red cummerbund; and in males like this one the red scarf at the back of the head. Their breast feathers tend to look quite grubby, as do the ones around their bills, though I don’t know if that’s the way nature has painted them, or if they’re stained from constant rubbing against the bark of trees; but coupled with the fact that they manage to look somehow crumpled around the eyes, I always have the fantasy that they’re coming home late from a long party, having set out looking gorgeous, but now rather the worse for wear.

Great spotted woodpeckers also have a kind of swooping, rollercoaster flight that adds to the impression of them being not quite on top of things. But in fact they’re very successful, increasing in number and expanding their range, possibly because they’re relatively adaptable and will eat quite a wide range of foods. In spring and summer they mainly eat insects and larvae, though they will predate the young of other birds from nest holes in trees if the opportunity arises, and in winter they move on to eating seeds and nuts, but at all times they’re open to food put out by humans, especially high-calorie peanuts and suet. This handsome male made several visits to the peanuts, arriving with enough fuss and flurry to dislodge other, smaller birds if the feeder was already occupied.