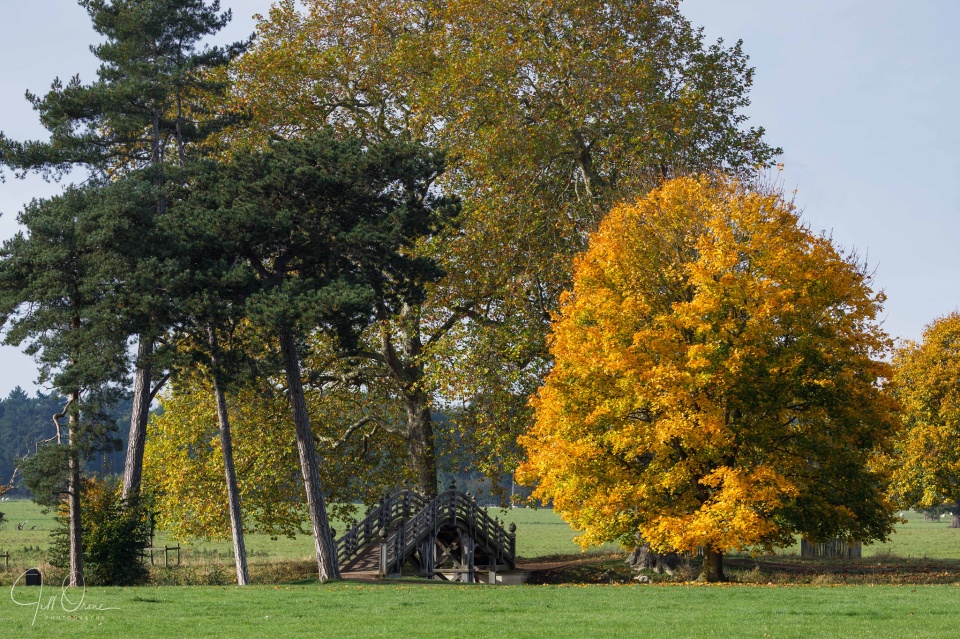 Today was a bit of a curate’s egg.

This was the good bit: a morning walk around Croome with R in nice light – though sadly not early enough to catch the frost and mist, because they’ve now moved onto winter opening hours. I had been hoping for something along the lines of this image, but opportunities like that don’t present themselves too often.

We’re especially fond of the big plane tree on the far side of the Chinese Bridge, with its painting-by-numbers bark, but it’s the leaf colour of the small sycamore on the near side that was getting all the plaudits today. Very sadly, a huge Cypress tree by the lake that was part of the original landscaping by Capability Brown was getting a different kind of attention, having toppled over into the water during the storms at the weekend. Although I’d heard about this on Facebook, and had warned R about it, we were still both shocked to see the venerable old thing lying there smashed, and it made me quite heart-sore. Despite this though, we had an enjoyable morning.

The more offish bit of the day involved me spending half the afternoon in a walk-in queue at the hospital, waiting to have blood tests done, and the latter part at the optician having my eyes checked over. I’m still havering about the extra drug I was prescribed last week, and though I’ve been able to justify postponing taking it by the need to have a set of baseline tests taken (for reference purposes if I do take it but then feel that it’s not agreeing with me), I knew that I couldn’t put off those tests indefinitely, and really needed to get them done today. Which they now have been, but I wish they’d eaten up less of what may turn out to have been the best afternoon light of the week.