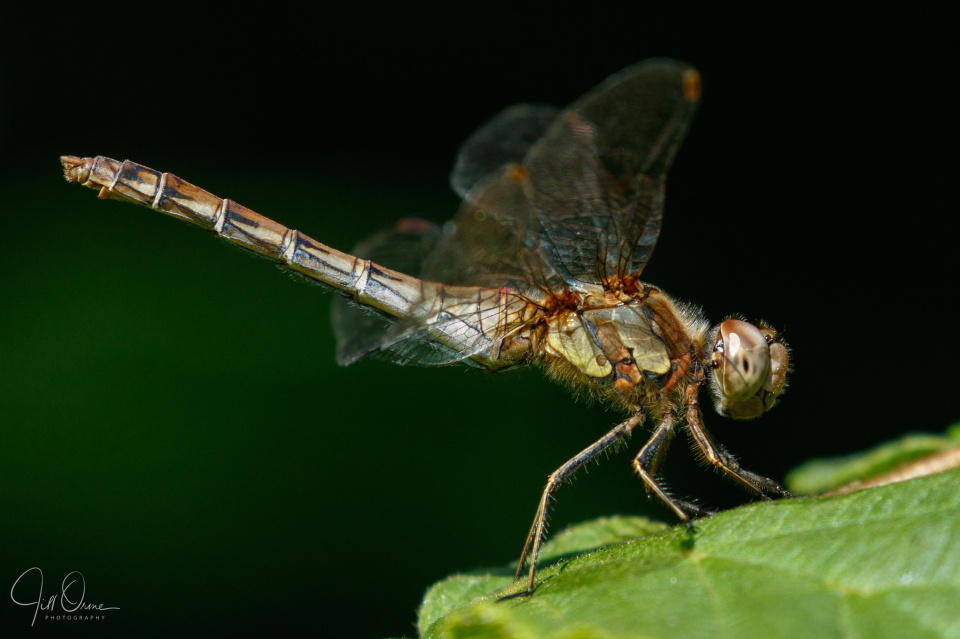 I was feeling somewhat over-mature myself by the time I encountered this old female Common Darter this afternoon, and I suppose it could be fellow-feeling that makes her my subject of the day. I did rather like her subdued geriatric colouring though, and I admired her elegant adoption of the semi-obelisk pose: raising the tip of her abdomen to reduce the surface area receiving direct sunlight, and thus lessen the risk of overheating. I was overheating myself at the time, and momentarily contemplated trying the technique – but swiftly decided that it was best left to experts.

After doing useful things all morning I’d made a sudden decision to take a trip to Grafton Wood, where the Brown Hairstreaks are now out. This is not my favourite wildlife site: it’s too big, much of it is quite overgrown, and I very much don’t enjoy lugging my gear down a lane, across a farmyard, and then over four fields, before getting the chance to photograph anything at all. But a couple of times a year – usually in Brown Hairstreak season – I gird my loins and make the trek. I have a reasonable hit rate with the Brown Hairstreaks, but today was not my day, though I met several other people who’d seen some. By way of compensation though – and very unexpectedly – I got two Purple Hairstreaks: the specimen below is one that was pointed out to me by two other photographers, but half an hour later, in a different section of the wood, I found another equally battered individual nectaring on hemp agrimony. 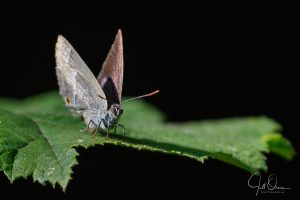 By the end of the afternoon, having trudged most of the way round the wood without getting more than a hint of a flicker of a possible sighting of a Brown, I was thoroughly fed up, and hot, and very, very tired. But for the fact that there was a flask of iced water calling to me from the boot of my car I might simply have laid down on the main ride, drummed my heels on the ground, and declined to go any further – at least until it got dark and I got scared. But needs must, so I stomped back across the four fields, through the farmyard, and up the lane, and was very glad indeed to get to my car and my water. After drinking most of it I tipped the rest over myself, then drove away with the car roof down, and arrived home in surprisingly good order.