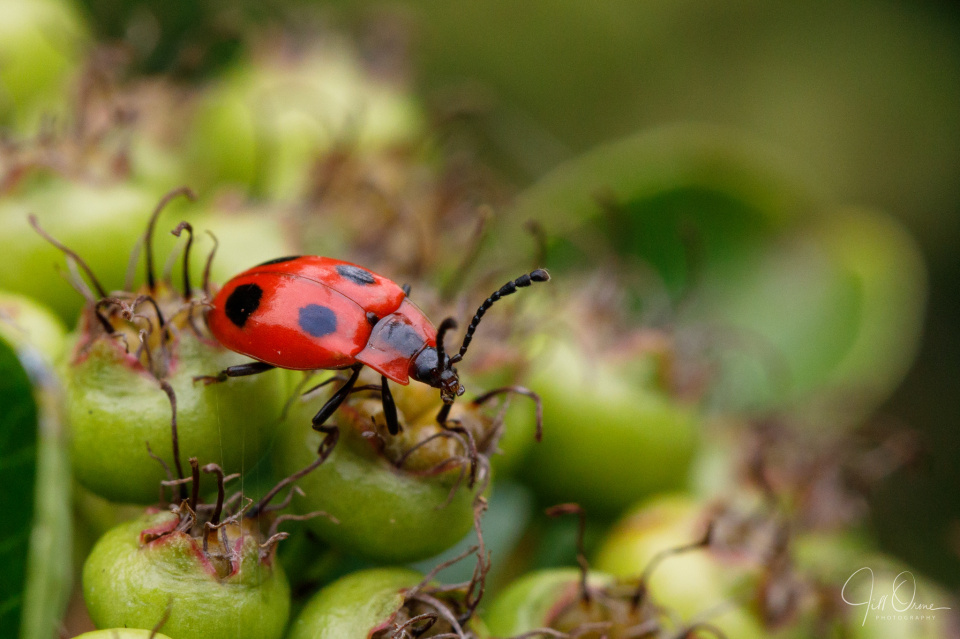 This is a rather messy image, I’m afraid, and as such it doesn’t please me. But on the other hand, it’s a photo of something I’ve never photographed – nor yet heard of – before today, so it lets me tick a more important box: any day on which I encounter a new creature, and get to learn a little about it, counts as a good day.

When I spotted this tiny beetle on the pyracantha berries, my first thought was that I didn’t know there were any ladybirds that were red with just four black spots. But when I got closer I realised that it was the wrong shape for a ladybird, and a quick search on my phone got me to a post from the Natural History Museum that identified it as Endomychus coccineus, commonly called the false ladybird.

It’s not especially surprising that I’d never met a representative of this species before, because they’re mainly nocturnal. They’re also fungivorous, and are usually found in clusters under the bark of dead and dying trees, so what this one was doing out and about, on its own, in the middle of the day, on a berrying shrub, is a bit of a mystery. It was probably safe from predators though, because its colour advertises the fact that it’s unpalatable. If I’d upset it, it might even have started bleeding a noxious pink haemolymph from its leg joints to deter me from eating it, but I’m happy to say that this didn’t happen, and after I’d taken its photo we went our separate ways with no hard feelings on either side.

Endomychus coccineus is the only representative of its genus found in the UK, though we do have a few other representatives of the family Endomychidae. All of these beetles are believed to feed on fungi, and many of them are have strikingly attractive markings, which is probably the reason they’re commonly called the handsome fungus beetles.