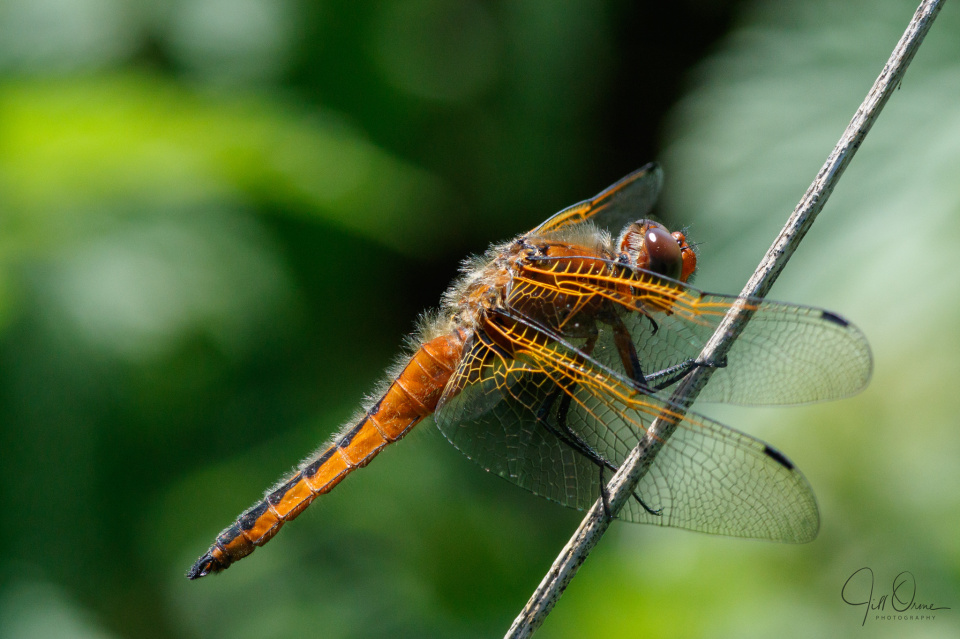 It’s always amused me when hoverfly recorders use the word “hoverating” to describe going out and rummaging about in search of hoverflies, and I’m sure they won’t mind me adapting the term to describe the two hours I spent on the bank of the Severn at Ripple this morning, fossicking around for Odonata. Not that very much fossicking was required where the damselflies were concerned: every step seemed to raise a little cloud of them from the grass, and my biggest problems were trying not to tread on any, and working out which few to photograph from the many hundreds of available specimens.

Dragonflies were in far shorter supply on the river bank, though if I’d had time to extend my walk around the lakes and ponds I’m sure I’d have found more. But the two I did get were very nice additions to my year list.

The first was a newly-emerged female Common Clubtail, which fluttered weakly across the top of a nettle bed, and came down right in front of me with her wings still folded back. Common Clubtails are said to use any available support to eclose when they come out of the water, but I’ve been told that here they tend to climb right up from the river (which is about fifteen feet below the bank) in larval form, and eclose deep down in the bankside nettles before moving onto the top of the vegetation to finish drying out. They’re skittish though, and I knew that if I was to get a shot of this specimen I’d need to do it before her wings were strong enough to carry her up into the trees.

The problem I had was that it was blowing a hoolie at that point: the nettles were whipping back and forth, the Clubtail was clinging on for dear life, and I was bending and stretching and twisting and turning to try to achieve a clear sight-line, while trying not to get too obviously in her face. As stems and leaves continued to blow around between us the camera’s autofocus went berserk, and I suddenly realised that I was making a kind of keening noise, on a rising note of desperation. Finally there was a lull: the foliage settled, the dragon began to move, I took a cautious step sideways to get her back in shot… and she snapped her wings open and flew. As did my language. Luckily she didn’t go far on that flight, but I had to shoot through the nettle bed to get the single usable image I managed to take of her before she lifted again and headed for the trees. If you’d like to see the fruit of all that hooha, I’ve included it in a post on my Facebook page.

This very fresh Scarce Chaser was just a few yards further on, sharing a trampled clearing in the nettles (which told me that someone else had already been hunting Common Clubtails there) with a Beautiful Demoiselle. Scarce Chasers are almost as badly named as Common Clubtails, the latter being sadly uncommon, while the former, though still red listed, have expanded their range so impressively in recent years that they can now turn up almost anywhere with suitable habitat in the south and east of England. We even had one in our garden, briefly, a couple of seasons ago. While I’ve photographed immature male Scarce Chasers before, it’s far more usual to see them in their mature livery, and I’m always struck by the extent of the changes they undergo, which I think are probably the most dramatic of any UK dragonfly. As this chap matures his thorax will darken, his eyes will turn sky blue, and his abdomen will develop a matching blue pruinescence, until he looks like this.

Before I go, I’d like to say how pleased and touched I was by the lovely response yesterday to my eight-year blipversary. I’ve tried to answer all the charming comments I received, but if you were one of the people who sweetly left some kind of mark of appreciation without commenting, please accept my thanks here.