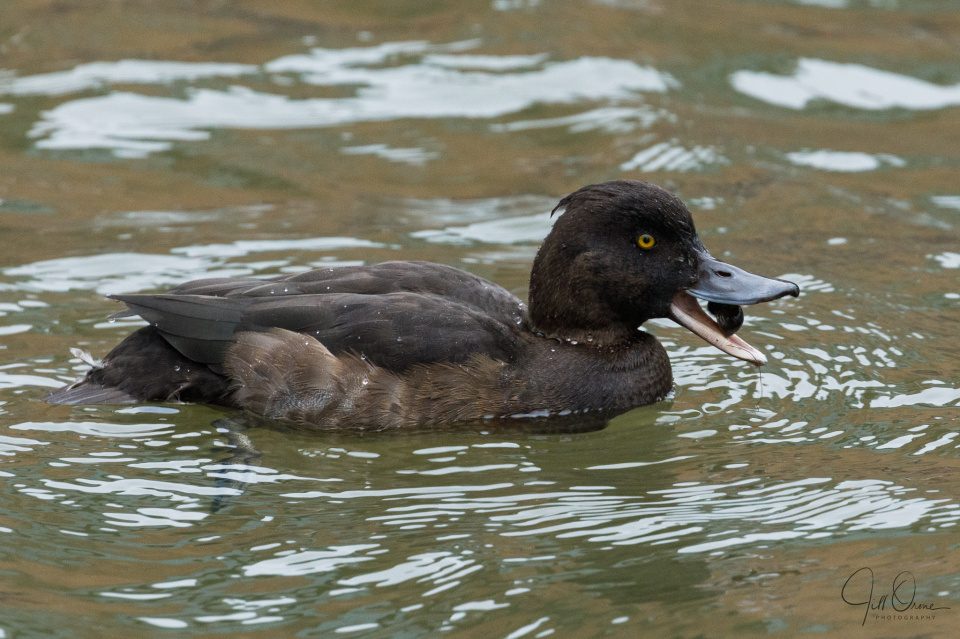 It was a fairly miserable day, weather-wise, but R had a strong urge to be out and about, so we created some errands as an excuse for going to Stratford and walking up and down the river. It was dark and blustery, but we didn’t actually get rained on, and it was a nicer environment in which to clock up some steps than the damp trench that encloses our village.

There are still twelve tufted ducks on the Avon at Stratford, mostly working as a group along the north bank between the Old Tramway Bridge and the theatre, but this one seems to be a rugged individualist and spends a lot of time hunting alone. Last week I photographed it down near the RSC Gardens, at which stage it was so brown that I thought it was probably a female. Today though, when we saw it at quite close quarters from the south bank, I started to doubt that: it doesn’t seem to have enough white around the bill, and I think its bumper is now paling. Its eyes are also more amber than yellow, which I believe indicates a first year bird, so I’m changing my claim to it being a young male, just starting to move into adult plumage.

Male or female, young or old, it’s an effective little hunter – or at least, had hit a winning streak today. I spend a lot of time watching tufted ducks diving, and more often than not they appear to come up with nothing (though a lot of the things they eat, such as aquatic insects and larvae, are so small that they wouldn’t taking much swallowing, and you wouldn’t necessarily know if they had something like that in their bill). It wouldn’t be unusual for a tuftie to dive eight or ten times without surfacing with a snail as big as this, but as we stood there watching, this one managed it twice in consecutive dives. Maybe this happens to be a very good place for molluscs, in which case it’s no surprise that having found it he prefers to keep working it rather than following the rest of the group; more surprising though, given that tufted ducks are inquisitive little birds, is that the others didn’t swim over to check out what he was up to.

I always worry when I see a string like the one you can see here in the bill of a water bird: so many of them seem to fall foul of discarded fishing line. This though, is just a string of weed, and in the course of juggling the snail into a good position to be swallowed – a process that usually involves repeated dipping in the water – he washed it away. Before leaving the tuftie to his lunch, I feel I should at least acknowledge the snail, which was quietly going about its snaily business a few seconds prior to this, and a few seconds afterwards was being crushed to death in the gizzard of a duck. It’s pretty tough, being so low down the food chain.