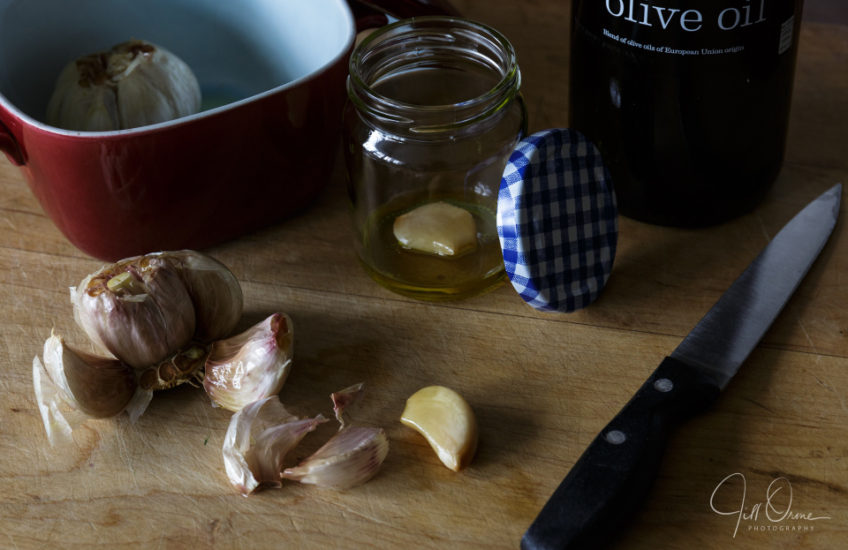 Firstly, I’d like to thank everyone who sent good wishes to R yesterday for a rapid recovery from labyrinthitis. Although he’s far from well as yet, he has managed to spend more time up and about today than he did yesterday – so we’re cautiously hopeful that this may be a less severe attack than the previous one.

This is another in the occasional series in which I try to pretend that the whole of my life doesn’t revolve around photography and blogging. Which would perhaps have been more convincing if I’d spent a bit more time this morning dealing with this garlic, and a bit less trying to turn it into a pleasing photo.

Anyway, I like to use garlic, but I don’t much like handling it in its raw state, and being a pretty careless cook I’m not much good at frying it off without burning it – and burnt garlic is not appetising. So every now and then I cut the tops off a couple of garlic heads, drizzle some olive oil over them, put them in a covered dish, and slow-roast them – these were in a 100°C oven for… quite a long time, actually, because I went off to do something more interesting and forgot all about them. An hour might do it, but these were probably in the oven for closer to two. Then I pop the now squidgy cloves out of their crispy skins (which is sort of fun if you don’t mind getting a bit messy), put them in a jar, and cover them with olive oil; they seem to keep in the fridge almost indefinitely, so there’s no waste even if it takes me a long time to use them all.

When I want to add garlic to something, I don’t have to bother with chopping/crushing/grating, or with frying off – I just squash to a pulp as many cloves as I need and mix them into the dish. Plus, the oil becomes wonderfully garlic-infused, so I can use that for cooking too – just as long as I keep the jar topped up above the level of the cloves.