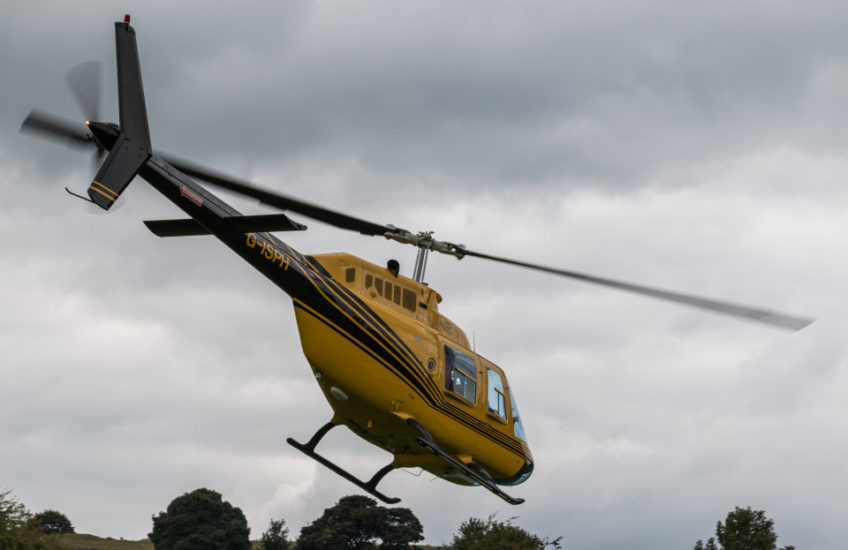 As a gift for his 60th birthday, R’s aunt and her husband bought him a helicopter flight over the Derwent Valley reservoir – and today was the day of the flight.

R and I drove up to Derbyshire this morning and met Betty and John, together with their lovely house guest Barbara from California, at a restaurant on the edge of the Chatsworth Estate. After a delicious lunch we drove out to Hassop, from where today’s flight was leaving. The main shot is the departure, but you can’t see R because he was on the other side of the helicopter, in the co-pilot’s seat.

This particular flight is known as the Dambusters’ Run because it goes along the training route used by 617 Squadron in preparation for Operation Chastise. R and I grew up in a time when it wasn’t possible to turn on the television on a Sunday without seeing British or American films about the Second World War, so we were very much indoctrinated in our youth with the victors’ view of these events; with age and distance from that time, of course, has come a broader perspective, and neither of us would take a simplistic view of the Dambuster raids today. Nevertheless, despite one’s distress about the human cost, it remains true that the Barnes Wallis’ inventiveness and the pilots’ skill and resourcefulness combined at that time and in that place in a most extraordinary way, and I think R found it both fascinating and moving to fly along the run.

R also has a much more personal emotional link to the Derwent Reservoir, because it’s named after the village where some of his ancestors farmed for much of the C19th. The original flooding of part of the valley in the early C20th left the village of Derwent intact, but within a few years it was decided that the Howden and Derwent Reservoirs were insufficient to meet the water needs of nearby Sheffield, and the village of Derwent and its neighbour Ashopton were flooded in the early 1940s during the creation of a third reservoir, known as Ladybower.

Luckily R’s ancestors had already moved elsewhere by the time Derwent was flooded, but it must have been a terrible situation for the residents of the two villages, who had to find new homes during what was in any case a time of great national fear and distress. The last service took place in the church of Derwent St James in 1943, by which time the graveyard had already been dug up, and the bodies reinterred in the churchyard in the nearby village of Bamford.

For several years the church spire remained visible above the reservoir – it was originally intended that it should stay as a memorial to the two lost villages, but maybe because this fuelled ongoing local ill-feeling, or maybe because of the sightseeing industry that was building up in the area, with people drawn by tales of supernatural happenings including the playing of a ghostly church organ, the Powers That Be declared in 1947 that the spire presented a health and safety hazard, and it was blown up. Now all that remains of the old village of Derwent is the Packhorse Bridge, at one end of which used to stand R’s ancestors’ farm – the bridge was declared a National Monument, and was demolished before the village was flooded, and rebuilt at the head of the Howden Reservoir.

If you’re interested in all of this, here are some Wiki pages about the Derwent, Howden and Ladybower Reservoirs; a page about the village; and a taster of a Pathé News film.