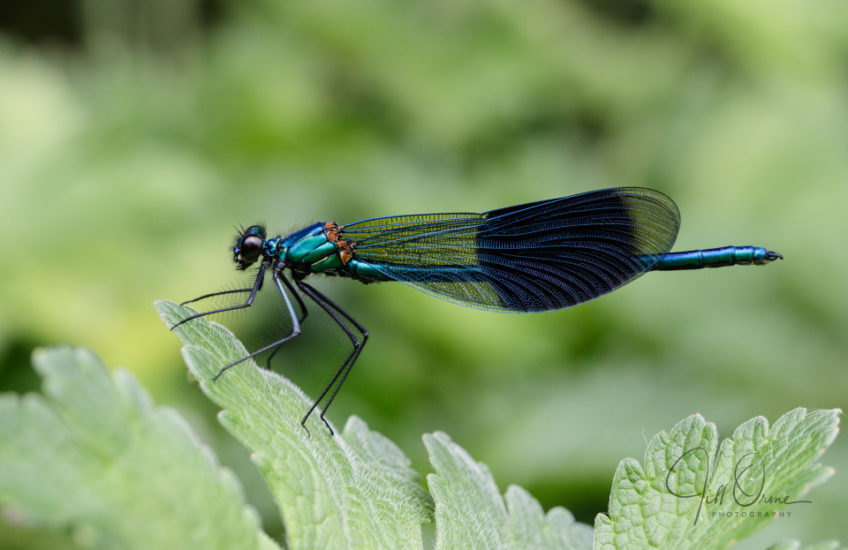 I hit the insect jackpot at lunch time today – unexpectedly, because a first look around the garden hadn’t revealed anything much other than honey bees and flies of various kinds, and I’d just decided that I was going to have to look further afield for a photogenic subject. Then as I was walking back across the lawn towards the house I caught an unmistakeable flutter of dark wings, and there he was among the geraniums: Calopteryx splendens, the Banded Demoiselle.

The normal resting posture of these damselflies is quite upright with the wings held at an angle above the body, but every time he realised I had a bead on him he would first freeze, and then very slowly lower his wings and sink downwards onto the leaf, so as either to make himself less conspicuous, or to gather himself for rapid take-off as soon as he got the chance – or maybe a little of both. His slow deliberate movement was mirrored by my own, as I tried to inch into the optimum position for a clear shot with the camera sensor parallel to his body – I can only hope that his thighs weren’t feeling the effort as much as mine were. Each time I thought I had at least one decent image I would stand up to rest my back and my jelly legs, and he would immediately fly – only to come down again on a different plant, when our exercise cycle would begin again.

By the time he’d clearly had enough and retreated into a rose bush, from which he observed me with what I felt was a rather baleful expression, I thought I had a few good frames, so I wobbled back into the house and left him in peace. About an hour later I went to the secret garden to fetch in some washing, and as I passed the rose bed he fluttered up again in such an agitated way that I went back to the house by another path, so as not to cause him any more stress. If he’s thinking of taking up permanent residence I may have to give him a name…

Those of you who were so sweetly concerned about yesterday’s hedgehog may be pleased to know that R phoned the Vale today and asked after him, and though it doesn’t sound as though he’s out of danger yet, he is still with us and is taking fluid. They’ve tested him for various things that go wrong with hedgehogs but haven’t yet received the results, so we’ll call again in a couple of days, when they should know more.