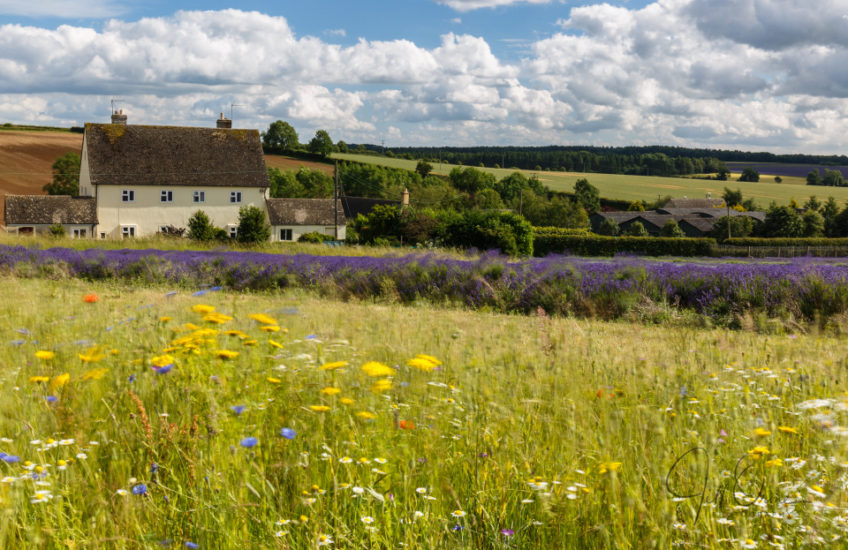 Towards close of business I made another trip to Cotswold Lavender, hoping for kinder light – but it was still fairly harsh, and to make matters worse the wild flower meadow has now largely gone over. But it was breezy and I had a tripod and some filters with me, so I thought it was worth trying some slow shutter-speed shots to try to capture movement in the meadow; I don’t think they were wholly successful, but it was an interesting experiment. For this one I used an 8-stop ND filter, stacked with a circular polarizer.

I arrived home a few minutes after R, who’d been to Oxford for a meeting. We were in the kitchen making a cup of tea when he glanced out of the window and spotted something odd on the lawn, which turned out to be a hedgehog, lying flat out in full sunshine and not looking at all well. I took out a saucer of water and tried to interest it in having a drink, but it didn’t respond even when I put a drip on its nose; so we decided that the best thing to do would be to take it straight over to the Vale Wildlife Hospital. I shaded it from the sun while R went and found a box and his gardening gloves, and we were heartened to see that it made an effort to curl when he picked it up – which was literally the first response we’d seen from it.

About 25 minutes later we arrived at the Hospital – which is staffed right through the night – and handed the box to the young woman on duty, who took it away to check the hedgehog over. She came back a few minutes later and told us that we’d done the right thing by taking him in because he was underweight at 375g, and definitely shouldn’t have been out during the heat of the day; she then gave us a reference number, and told us that we were welcome to phone up if we wanted to know how he was getting on.

This wildlife rescue and rehabilitation centre is a tremendous resource for our region, and I very much admire the work done by the staff and volunteers. In previous years, before I became aware of the VWH, I’ve handed over sick and injured creatures to a local vet, or occasionally called in the RSPCA when a larger animal has needed to be trapped, but I’ve never been entirely confident about the likely outcome; but because the Vale specialises in treating wild creatures I’m quite happy that our little invalid will receive the best possible care, and that provided we found him in time he’s likely to recover and be returned to the wild. The Hospital is voluntarily funded and costs around £30,000 per month to run, so we left a donation to help cover the cost of his care, and tomorrow I’ll also send something from their Amazon wish list.

The Hospital web site is here if you’d like to know more about them.