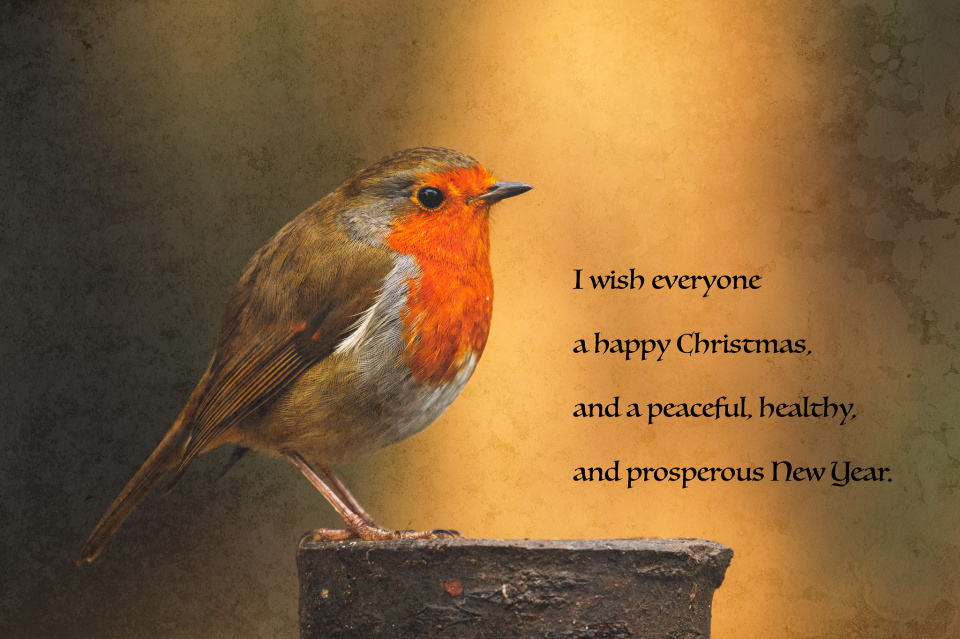 R and I went up to Hillers this morning, to pick up some last-minute Christmas bits and pieces from the farm shop – it would be a shame if the fridge door were able to shut, after all – and to indulge in coffee and cake. I also spent a literal two minutes in the bird hide, where this robin obliged me by posing beautifully in between trips to the bird table. It wasn’t exactly singing, and it wasn’t exactly humming, but it was making a kind of la-la-la noise without fully opening its beak, which was really rather sweet.

On the way home we drove past a buzzard, sitting on top of a hedge. “Bugger,” I said festively, at which R generously found somewhere to turn the car around in the narrow lane, and went back. By the time we reached the buzzard he was down in the ditch worming, so R pulled into the bellmouth of some barns a little way past him, and I cautiously got out of the car. I needn’t have thought I could get away with that though – he was up and off in a flash. My settings were all wrong after shooting in the dark woodland at Hillers, but I managed a few reasonable frames, one of which is here, if you’re interested. I’m reasonably sure this was a male, because he wasn’t very big: unlike red kites, there’s a noticeable size difference between male and female buzzards, with the males being about 30% smaller, weighing between 500g and 1kg.

Anyhoo, as we’re now properly into the Christmas countdown, and my next few posts may well consist of panic-stricken gibberish and emergency phone shots of my breakfast, I thought that I’d take the opportunity of a relatively calm evening to wish you all the compliments of the season. I hope that you receive all you’re wishing for.