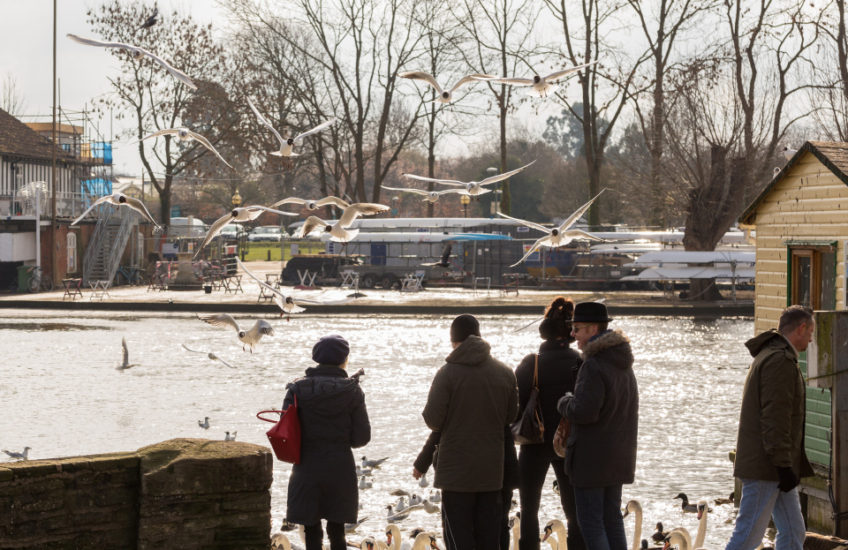 This week’s homework for the workshop A Year With My Camera was to shoot a contre-jour image, and try to get the exposure right straight out of the camera. Stepping around the fact that I don’t think there is a single ‘right’ exposure for an image like this (although clearly there is an almost infinite number of ‘wrong’ ones), I haven’t been able to tackle this task for the past couple of days because we’ve had no sunshine at all.

Today however, the sun came out as R and I were driving Arthur to Stratford for his fortnightly torture session by shampoo and dryer, so after we’d taken a coffee-and-cake break I went down to the river with the camera, and immediately saw this scene. Normally under these conditions I’d expose for the bright sky and water, assuming that I would be able to lift the foreground shadows enough in editing to bring out some detail in the figures, but today I wanted to capture a sense of the brightness I was looking at, which was dazzling. So I exposed for the foreground, then checked against the water, decided that +3 stops was workable, and took the photo. I looked at the histogram and it was clearly bleeding off to the right, so I reduced the exposure and took another few shots.

When I processed my files this was the only one which spoke to me – when I took it the people were unaware of me and the gulls were hanging in this quite interesting formation, but by the time I’d faffed with the camera some more the gulls had moved and the humans knew I was there, so the energy of the later shots was different and I didn’t like them as much. In the end this was the only one I kept of the set. I think I’ve flattened the contrast too much in Lightroom – I’m an overly-cautious editor, and I really need to free myself from the fear of clipping – but I’m not about to rework it now. I still like the sense of the two worlds facing off against each other, and I hope you like it too.