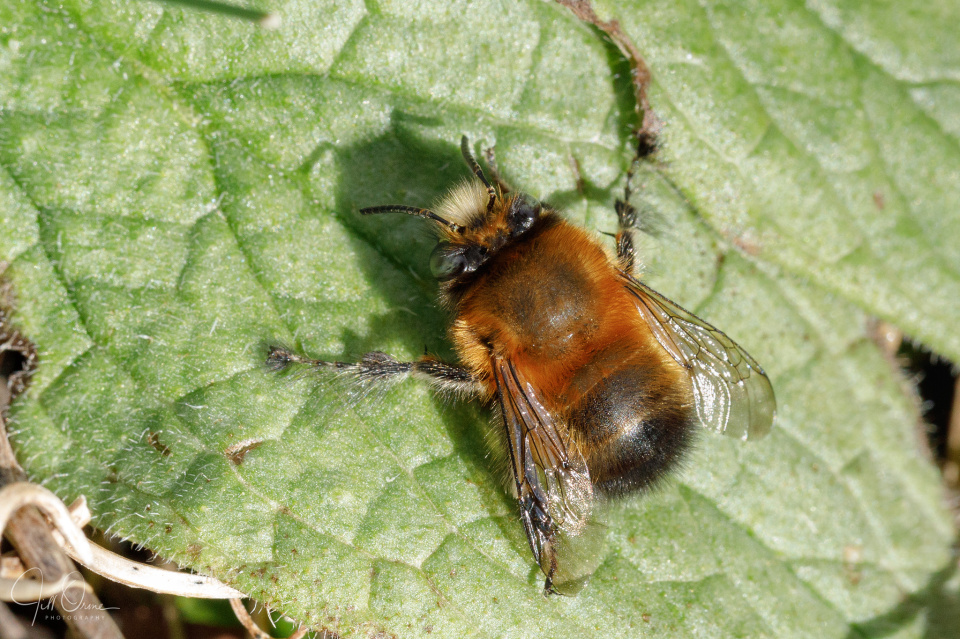 Don’t let the light and shadow in this photo lull you into thinking that today was warm. As I knelt on the sodden lawn this afternoon, photographing the only one of the hairy-footed flower bees that had braved the frigid wind, I thought longingly of the thermal layers I recently put away on the assumption that I wouldn’t be needing them again until next autumn.

The only (slight) consolation was that my poor victim was too cold to make the leap into hyperspace to evade me, and with a little persistence I was able to get in very close with the macro. I wouldn’t worry about him too much though – these chunky little bees are surprisingly hardy, and very good at finding cracks and crevices in which to shelter overnight, or if the weather turns really hostile. He was out and about today in the hope that a female would emerge, and he’d be on the spot to jump her before any of his rivals saw her – though I think he probably waited in vain.

So anyway, I didn’t do gardening in the end, because it was about 6°C, and a friend reminded me yesterday that if you clear last year’s garden debris before the temperature is reliably above 10°, you risk destroying any larvae or pupae that are still developing within it. So instead – shamed by the fact that someone who came to talk to me through the car window as I arrived at choir rehearsal this lunchtime looked at the state of the door and recoiled – I washed the car. No, honestly, I did – and I don’t think it’s even a year since I last did it. I believe I deserve some kind of award.

Tomorrow I will mostly be digging my thermals back out of storage. You know that thing they say: “Ne’er cast a clout till may be out”…? Climate change notwithstanding, it remains pretty sage advice, and the may – that is, hawthorn – isn’t likely to be out for at least another six weeks. You have been warned.