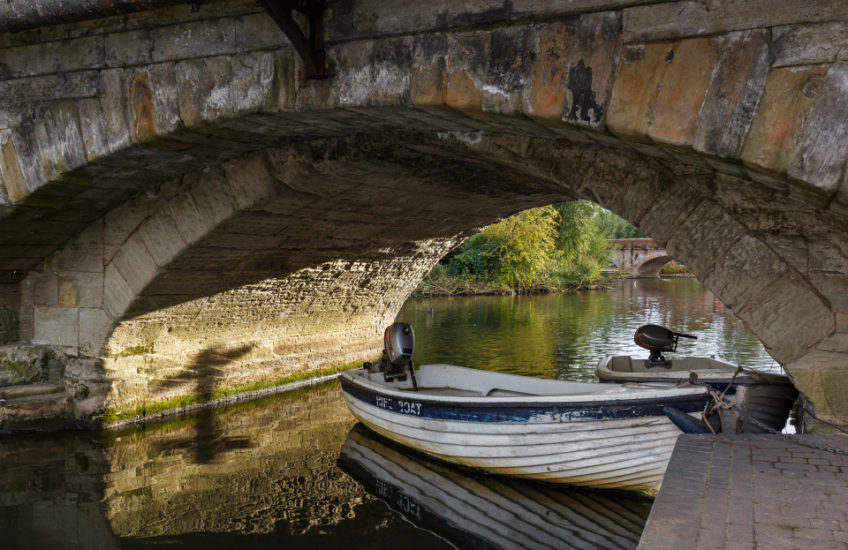 I went to a photography workshop this afternoon, which ran on quite late; and as I hadn’t yet taken any photos I stopped off in Stratford on the way home, and parked up in the Recreation Ground car park. After snapping a few shots from opposite the theatre, my eye was caught by a couple of boats underneath one of the arches of the Clopton Bridge, and it occurred to me that they must be something to do with the Marina, which I hadn’t ever photographed before.

Stratford Marina is essentially in the middle of the town’s horrible gyratory system, and isn’t really somewhere you would think of walking to without a specific purpose in mind; but now that I had one, I dodged the traffic and walked down to it – and found that it’s moderately picturesque, and has what looks like quite a nice café. It’s very small, so there are only a few boats, but there’s quite a photogenic view along the Clopton Bridge, which is the main road bridge into the town from the south; and sure enough, under one of the spans of the bridge were the boats I’d noticed earlier.

The light was pretty dismal, but I’d taken one shot which was enlivened by a couple of swans going past between the boats and the island – and then suddenly, and very briefly, the sun came out and I just caught it before it disappeared again. The second bridge which you can see in the distance is the Old Tramway Bridge, which is now a footbridge; and the island is a nature reserve.