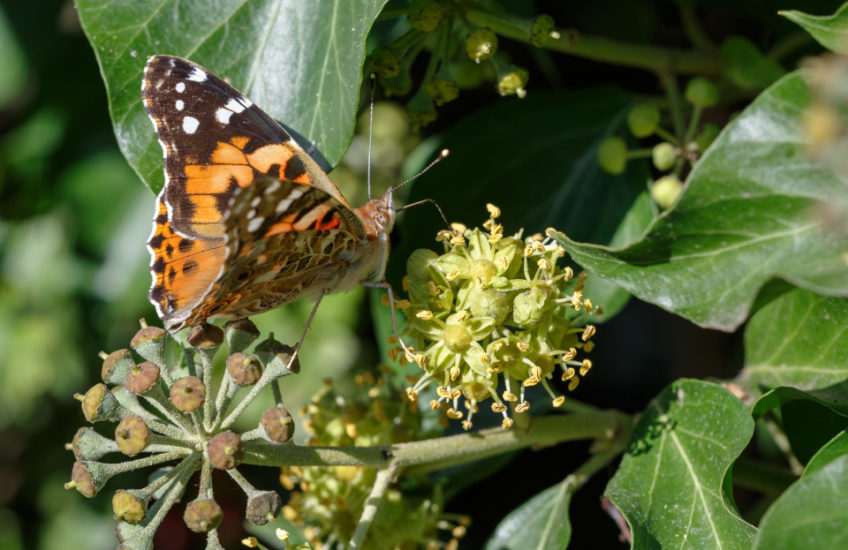 I’m pleased to tell you that I took a second and a third in the Little Girls’ Class at Big Girls’ Camera Club last night, much to my surprise; and happily I really liked the image that came first, so I didn’t mind losing to it. The judge was excellent – very constructive in all his criticisms – and I learned a lot just from listening to him. There’s another competition next week, so I must sort out some shots to enter for that too.

I’m still running to stand still at the moment, and I don’t see much of a let-up before next week; so all I had time for today in between desk stuff and choir was a brisk photo walk around the village. I headed straight for the ivy patches where I saw yesterday’s bugs, but neither Ectemnius nor Ivy Bees were to be found. To my surprise though, on the sunniest bank there were several late butterflies: a couple of Red Admirals, and one Painted Lady, which I’m featuring because it’s only the second one I’ve seen this year.

The Painted Lady (Vanessa cardui) is interesting not only because of its beautiful markings, but because it’s a migrant to the UK, arriving (sometimes in huge numbers, though that hasn’t been the case this year) all the way from North Africa. Not surprisingly, butterfly fanciers get quite excited when they start to appear, and sightings are eagerly logged as they make their way steadily northwards, sometimes getting right to the north of Scotland. Despite the rather extravagant fur coat this one is wearing, it seems that they cannot ever survive our winter.

The extra shot is my favourite of the day. I was heading back homewards, when I happened to glance at a patch of asters growing by a neighbour’s doorway, and spotted two Common Carder bees sleeping on adjacent flowers – like fairies in old children’s stories, only much better. I love Common Carders (Bombus pascuorum) – with the possible exception of hairy-footed Flower Bees they are my favourite bumblebees, because they’re so pretty, and so very industrious: even on a day when there’s not much else around because the weather is discouraging, you can almost always find some Common Carders busily collecting food for their colony. Sometimes though, they wear themselves right out and just have to stop for a short nap, which is what’s happening here. By the time I’d found a focus plane that got them both reasonably sharp and taken a couple of shots, the one on the left was beginning to stir, and as I walked away it was moving around its flower – but the one on the right was still spark out. 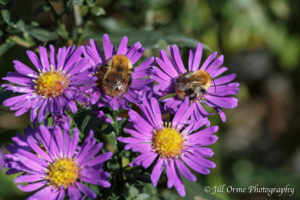 While I was out at choir this evening John Lewis delivered our new sofa. R and I are both very pleased with it, so it seems that all the searching and testing and rejecting were worthwhile; in fact the only problem with it was a sad lack of dogs, which has now been partially rectified by way of cushions.