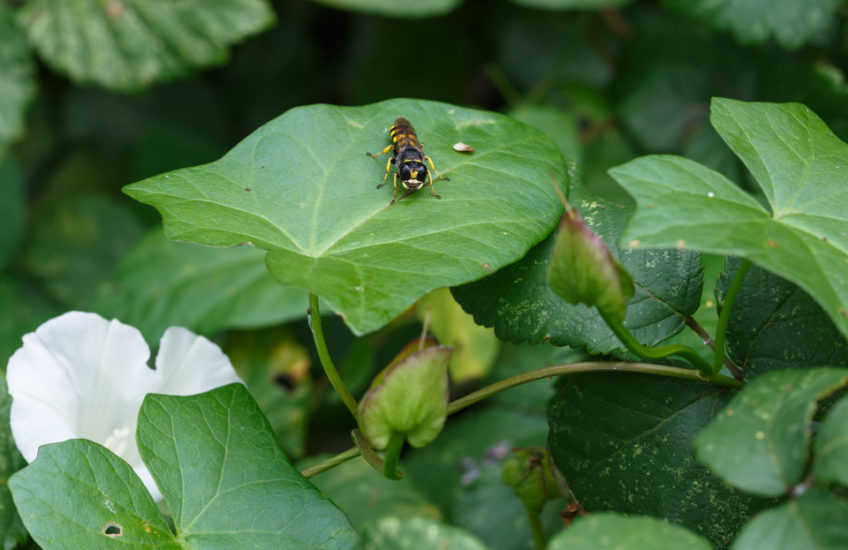 Look at its adorable little face! You can’t tell me that’s not handsome. It’s an Ectemnius wasp of some kind (it can’t be identified more fully than that from photographs), and I think it’s one of our most handsome wasps. Viewed in anthropomorphic terms though, its habits are reprehensible – it uses those wicked mandibles to capture medium-sized flies and hoverflies, which it then carries away to its nest. In fact when I saw this one it was hovering above a large flowering ivy plant watching the insects that were feeding on it, and it did then swoop down on an Eristalis hoverfly – but missed its prey on that occasion.

Ectemnius also uses its mandibles for digging out a burrow, either in rotten wood or soft ground depending on the species. These wasps nest in aggregations or colonies, so even though this is the first one I’ve ever seen in the village, there must be more of them about.

I had another first today too: I found a Colletes hederae bee. Sadly, owing to extreme incompetence I was using too slow a shutter speed, and my photos were lousy – so I’ll have to wait and see whether my record is accepted by the BWARS chaps or not. I hope it is, because I don’t believe the Ivy Bee has been logged round here before.