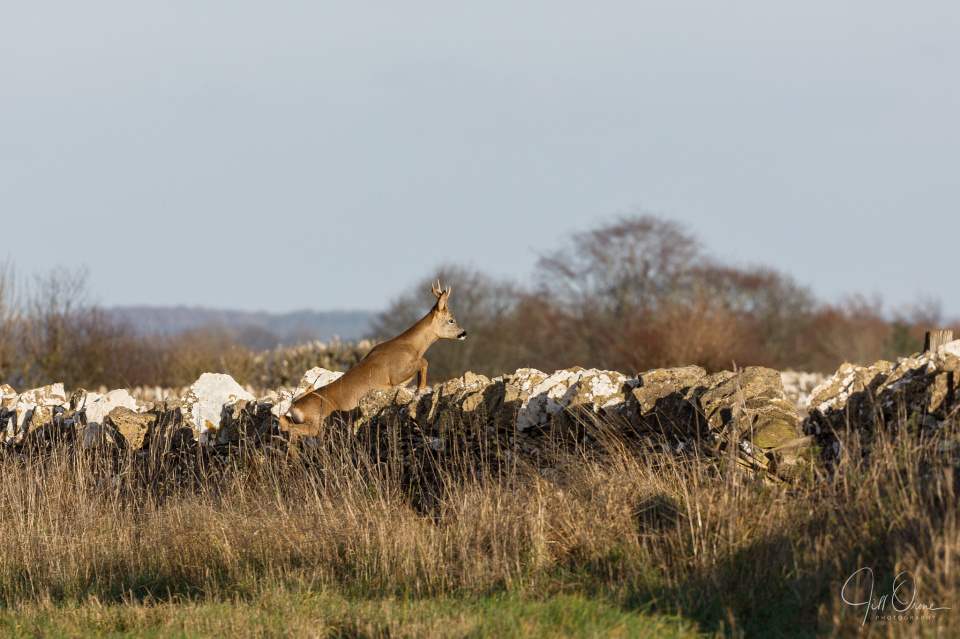 I was standing in happy solitude by the wall on the south side of the owl field, chimping at some earlier photos on the back of my camera, when I glanced up and found a roe deer doe staring at me from about twenty feet away. I muttered something unprintable and swung up the camera, at which point she bolted, followed by four others. By the time the lens had focused on deer rather than grass, the last of the five was almost past me, but I did at least get that final buck; well, sort of, anyway.

The group ran along the owl field, hurdled the wall much further along, and then began to gallop down the field in which I was standing, along the boundary wall with a stone quarry. After a couple of hundred metres they saw something they didn’t like the look of, down in the valley, and came to an uncertain halt.

I was watching them and taking photos, and they were watching me and clearly trying to decide what to do next, when a group of hikers appeared behind them, heading in my direction. This forced the decision, and the deer turned back, running between me and the hikers, and leapt the wall back into the owl field, disappearing into the long grass almost immediately. I had plenty of time to get focus and shoot as each one gathered itself to jump, so I have a sequence of photos of the departure – but interestingly it only includes the four full-sized animals, and not the smallest one, which looked to be a pretty well-grown fawn. As it’s not really credible that it would have allowed itself to be separated from the others, I can only think that it jumped the wall somewhere else where it was lower, and I was concentrating so hard on this section that I didn’t see it go.

The handsome buck in this photo is also shown in my extra, trotting along the wall. I think he should be called Prancer. 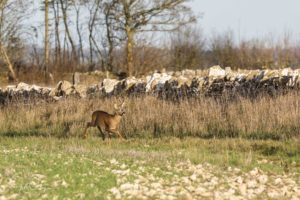