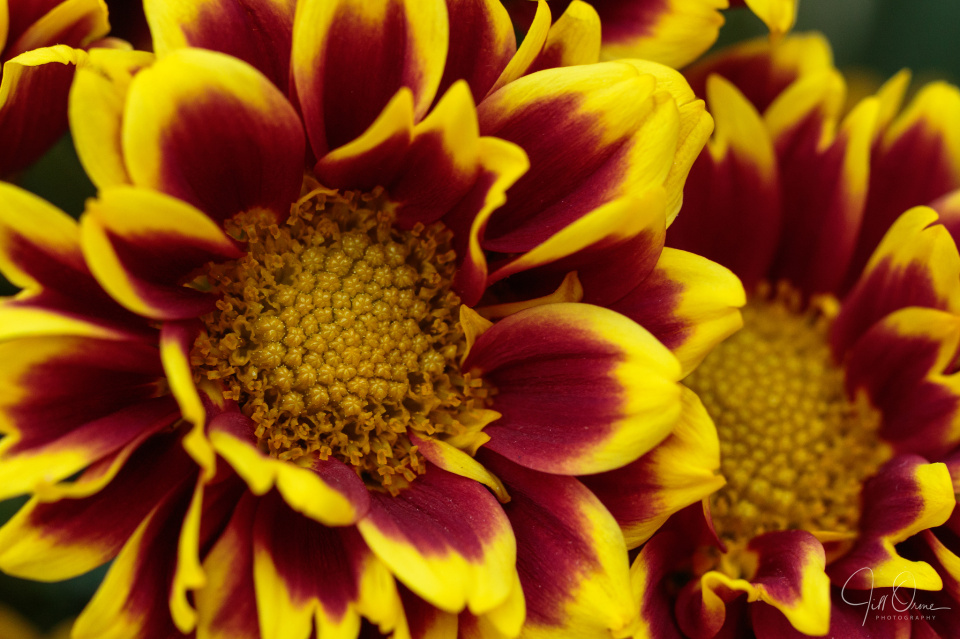 Because of the red and gold I thought that these chrysanthemums kind of worked for today, and because they’re small – the blooms are only a couple of centimetres across – I’m also hoping that they work for Tiny Tuesday.

R and I had a lovely day with Child Two, at the home of my sister, BiL and nephews. Great company, fabulous food, much laughter and (between the sisterhood) competitive talking were all enjoyed. Personally I would like to have done less squeaking, grunting, and whiffling, but everyone was very tolerant, and it could all have been so much worse.

I should probably make it a New Year resolution to study The Hitchhiker’s Guide to the Galaxy more closely:

“There is an art… or rather, a knack to flying. The knack lies in learning how to throw yourself at the ground and miss. Pick a nice day… and try it.

“The first part is easy. All it requires is simply the ability to throw yourself forward with all your weight, and the willingness not to mind that it’s going to hurt.

“Clearly, it is the second part, the missing, which presents the difficulties.

“One problem is that you have to miss the ground accidentally. It’s no good deliberately intending to miss the ground because you won’t. You have to have your attention suddenly distracted by something else when you’re halfway there, so that you are no longer thinking about falling, or about the ground, or about how much it’s going to hurt if you fail to miss it.

“It is notoriously difficult to prize your attention away from these three things during the split second you have at your disposal. Hence most people’s failure, and their eventual disillusionment with this exhilarating and spectacular sport.

“If, however, you are lucky enough to have your attention momentarily distracted at the crucial moment by, say, a gorgeous pair of legs (tentacles, pseudopodia, according to phyllum and/or personal inclination) or a bomb going off in your vicinty, or by suddenly spotting an extremely rare species of beetle crawling along a nearby twig, then in your astonishment you will miss the ground completely and remain bobbing just a few inches above it in what might seem to be a slightly foolish manner.

“This is a moment for superb and delicate concentration. Bob and float, float and bob. Ignore all consideration of your own weight simply let yourself waft higher. Do not listen to what anybody says to you at this point because they are unlikely to say anything helpful. They are most likely to say something along the lines of “Good God, you can’t possibly be flying!” It is vitally important not to believe them or they will suddenly be right.

“Waft higher and higher. Try a few swoops, gentle ones at first, then drift above the treetops breathing regularly.

“DO NOT WAVE AT ANYBODY.”

It doesn’t sound like the easiest thing in the world, but for someone like me who both falls over a lot and is very easily distracted… I’m sure it’s doable!