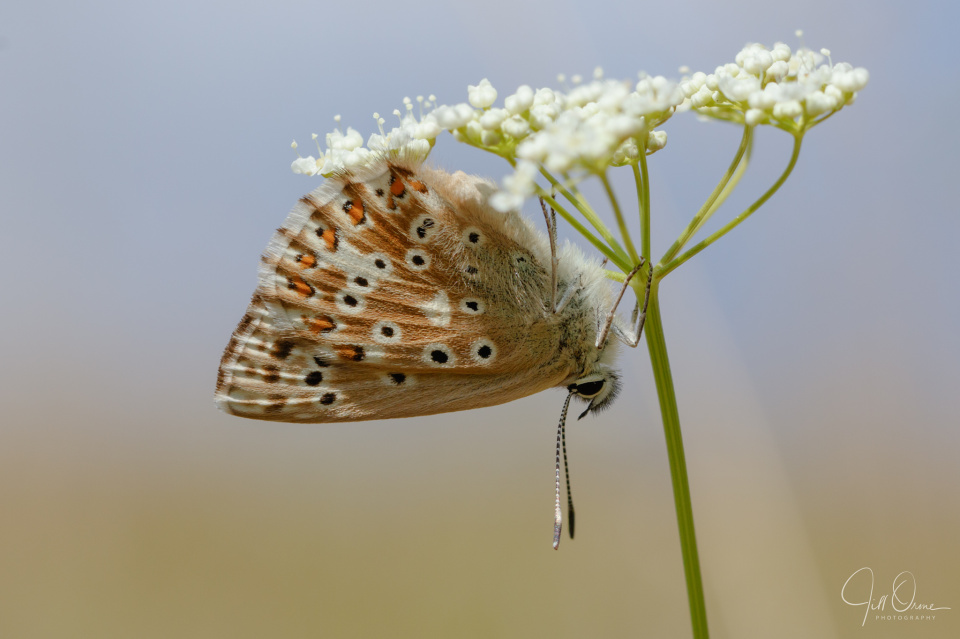 Tired after yesterday’s long day out in London, I struggled to get moving this morning. But if there’s one thing that’s guaranteed to get me walking, it’s the thought of a butterfly I haven’t yet photographed this year, and I heard at the end of last week that both Dark Green Fritillaries and Chalk Hill Blues had been spotted at Prestbury Hill; so this afternoon I zoomed off down to Cheltenham.

I hadn’t been to Prestbury since the demise of the late spring butterflies, and was a little sad that all of the Green Hairstreaks, Dukes of Burgundy, and Small Heaths had vanished – it seems like a very long time until next year’s brood will emerge. Nor was there any sign of the large number of (now confirmed) Five-spot Burnets that were all over the Masts Field on my last visit; though a few handsome Six-spot Burnets have now emerged. There were still a few Small Blues at the bottom of the slope though, including two very fresh and highly territorial males, which probably indicates that the colony has produced a small second brood.

I did see a number of male Dark Green Fritillaries – but they were fresh, fast, and highly focused on looking for females, and I failed to get the lens on any of them. Within about a week they should have calmed down a little, and I may be able to get a photo, but today was not my day.

Luckily there were quite a few male Chalk Hill Blues in the lower section of the field, nectaring and bickering with each other in the absence of any females to chase, and though they were flighty I did manage some reasonable shots – one of which is my extra today. 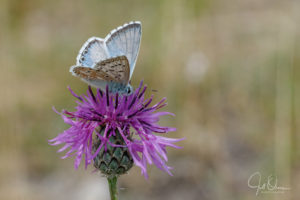 I was on my way back up the punishing slope when I spotted something that didn’t seem to make sense about a small umbellifer to one side of the sunken path, and when I turned the lens on it I realised that it was a partially protruding wing. Closer inspection then revealed a female Chalk Hill Blue, but she was keeping such a determinedly low profile that to get level with her to take this shot I had to kneel down, with my bum in the air and my elbows on the scree. I don’t recommend this posture, but I have to say that I’m pleased with the way the photo came out.