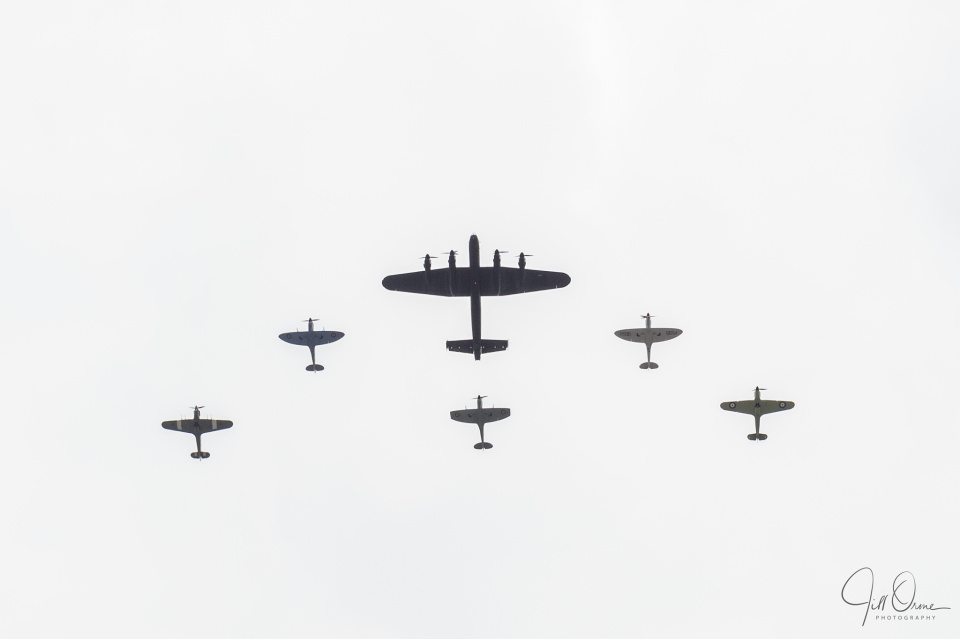 R and I hadn’t planned to be standing on The Mall at lunch time today, as a hundred aircraft staged a fly-past over Buckingham Palace to mark the centenary of the formation of the RAF – in fact, we hadn’t even known that it was happening until this morning, when R read about it in the newspaper and I saw it on breakfast news. But we happened to be going to London, where we had timed tickets to see two exhibitions, and the more I thought about it, the more sure I became that however much I might admire the work of Dorothea Lange (and I do), neither of us was going to get much out of being in the Barbican today while knowing that a once-in-a-lifetime event was about to happen several miles away and we were going to miss it. So we ducked out of the photography and went to The Mall instead, planting ourselves close to Admiralty Arch, in the middle of a good-natured and cosmopolitan crowd of several thousand people.

I think my politics are reasonably evident to anyone who’s read this blog for a while, so I won’t bother you with them here, except to say that I was slightly uneasy in case the event turned out to be jingoistic – but it wasn’t. I’ve chosen to feature the Lancaster, Spitfires and Hurricanes that took part because I didn’t expect ever to see these aircraft flying, and I doubt I’ll ever see them again, but by far the largest part of the fly-past was a parade of the wide range of aircraft currently used by the RAF, most of them for training or in logistics. It would be fair to say though that these planes from the Battle of Britain Memorial Flight got the biggest reaction from the crowd, and caused the most emotional reaction in me – looking at them and thinking about the brave young men who flew them brought me very close to tears.

There’s a page here about today’s event, which includes a list of the aircraft that took part; and if you click on the What’s On tab at the top you can find out about the remaining events of the RAF’s centenary year. The BBC’s coverage of the fly-past is up on YouTube, and shows that HMQ especially enjoyed the same bits as the rest of us: this flight, and the Red Arrows, who rounded off the display. And a few more of my photos are here, if you’d like to see them.