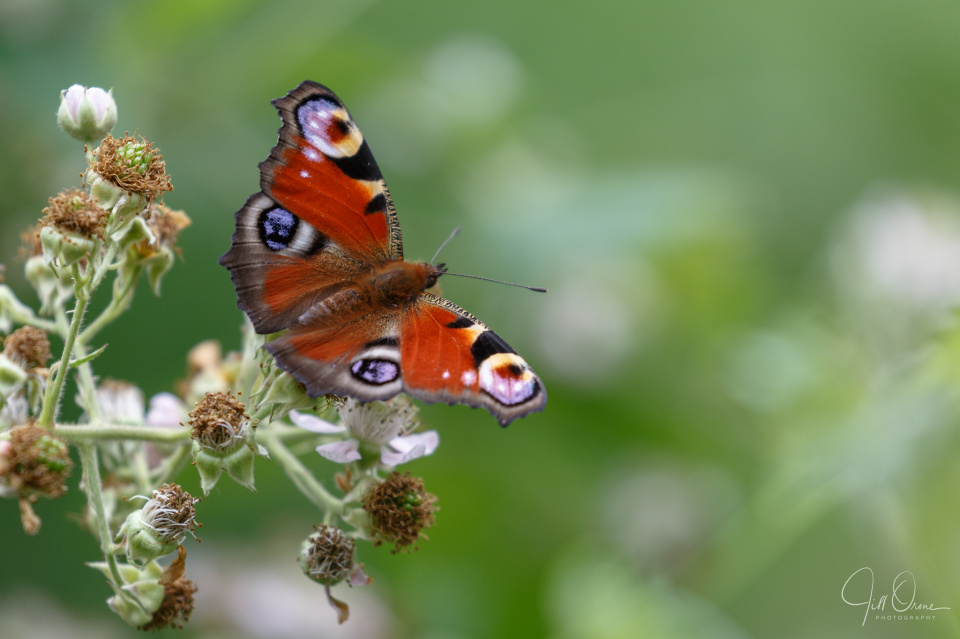 This is not the first Peacock I’ve blipped this year – that would be this one, nearly three months ago – but whereas that was one that had overwintered, this is a member of this summer’s brood.

The MX-5’s brakes were fixed today (bringing us, to our mutual satisfaction, a visit closer to the day when the Coventry dealership and I can terminate our relationship); and while the work was being carried out I walked around Bubbenhall and Ryton Woods, both of which are accessible from Ryton Pools Country Park. I did see a couple of Purple Emperors, but neither stopped moving long enough for me to take a photo; there were plenty of other posey butterflies about though, as well as some rather handsome dragons and damsels, so I had quite a few things to choose from for today’s post. The Peacock gets the nod mainly because of its dramatic looks – very much too exotic for England, I always think; but partly also because someone in a Facebook butterfly group was moaning the other day that these Hairstreaks and Emperors are all very well, but who’s seen a Peacock this summer, eh? Anyone? No – thought not.

While I was walking my 15,000 steps around the woods of Warwickshire, communing with some of the flying things and trying not to get bitten by the others, my phone was busy sending me regular updates on our omnishambles of a Government. I didn’t really need to know there and then that Boris Johnson (furious, apparently that David Davis had stolen a march on him by resigning yesterday, and thus apparently putting himself in pole position to bring down the Prime Minister) had followed suit today; nor that his resignation letter contained a rambling rant about lorries and female cyclists that it took the Twittersphere all of about three minutes to prove was untrue; nor that civil servants in the Foreign Office were quietly dancing on their desks and breaking out the Prosecco in celebration of his departure…. but, being a news junkie, I couldn’t prevent myself from reading about it.

Half way round Ryton Wood I took a bet with myself that Former Disgraced Former Defence Secretary Liam Fox would also find it necessary to scuttle off after his brothers in arms, and was confident that I’d be in new lens territory by tea time – but it turned out that I was wrong: apparently Fox has no principles that he’s not prepared to compromise, and finds life at the coal face of flying round the globe failing to interest anyone in a trade deal preferable to the prospect of being returned to the back benches – so he stayed put. Still, there’s always tomorrow.

Most of the time I am angry enough about Brexit – the lies, the cheating, the spinelessness of most MPs, the fact that I’m going to have my EU citizenship stripped from me against my will – to have nothing other than dripping contempt for everyone in the party that has foist this lunacy on the country. It says quite a lot about straws and small mercies that I’m currently feeling a low level of reluctant admiration for May, who has apparently now decided that she has nothing to gain by trying to appease the headbangers, and is showing an unexpected amount of backbone. Even the promotion of Jeremy Hunt to Foreign Secretary looks like a very slightly positive move – partly because it gives the NHS a rest from him, and partly because – whatever else he might or might not bring to the job – the man does at least have some manners.