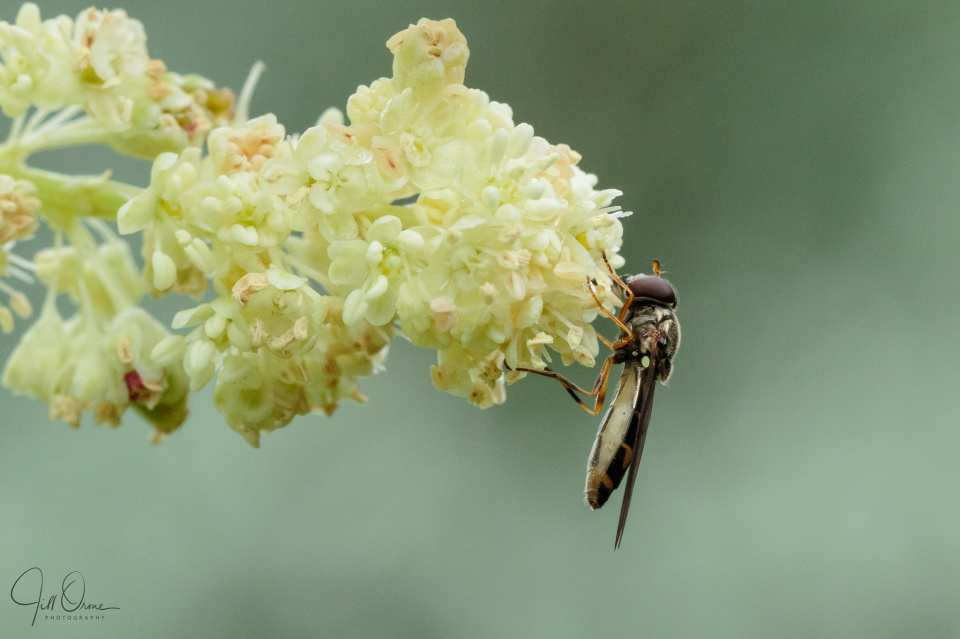 Today’s re-run of Groundhog Day was marked by the arrival of the small batch of emergency pond plants I ordered last week from Sweet Knowle Aquatics, who seem to have got their…. act…. together rather better than some of the bigger suppliers. The Leicestershire nursery where I placed a larger order a couple of weeks ago is currently managing to despatch three days worth of orders per week – a situation which in my mind is like trying to run up a downward escalator – and if we’re lucky ours might just arrive some time in the second half of May.

After a cold, blowy, and wet morning, the afternoon turned dry and the sun even attempted to come out – though it was still chilly, especially when I was shoulder-deep in the wild pond, placing a Nymphoides peltata down in the centre. Because of the temperature and the wind there weren’t many insects about, but I did manage to creep up on this chequered hoverfly, Melanostoma scalare, feeding on a rhubarb flower head.

Melanostoma scalare is a very common hoverfly, but easily overlooked because it’s one of the small species – this female is probably about 8mm long. Interestingly, I think it’s the only species I’ve ever seen in which the halteres are (often though not always) green, though I haven’t been able to find out why this should be the case. In this photo the left haltere is the green blob just behind the base of the wing; it’s a kind of balance organ, detecting rotational forces and providing feedback to the muscles controlling the wing, and thus allowing the hoverfly to adjust its position in space.