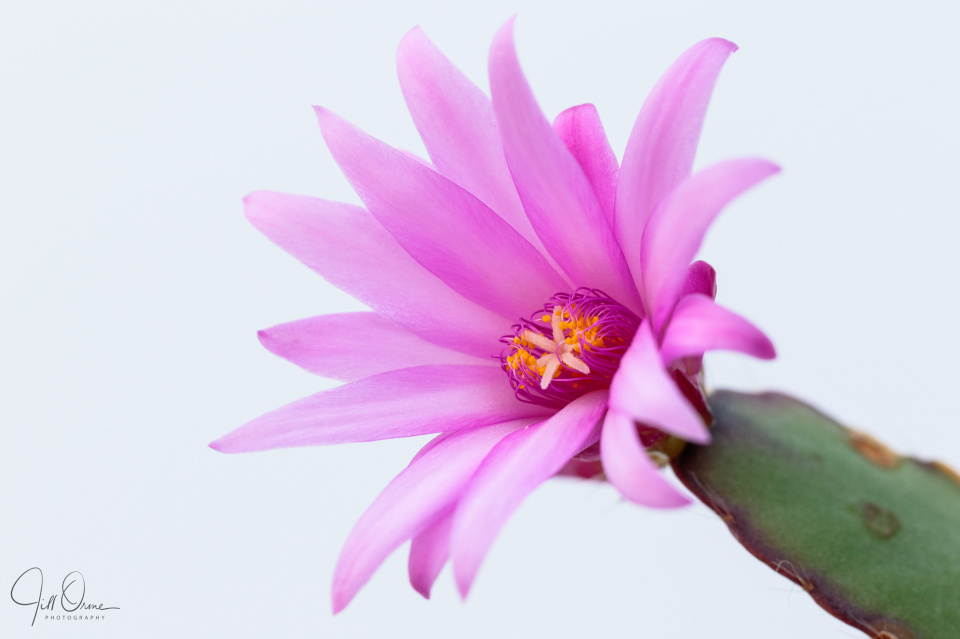 Given that Easter is a moveable feast, I’m not going to quibble about the fact that the Easter cactus has only just come into flower. Particularly as the plant is now 28 years old – it arrived in a mixed planter that was sent by R’s then employers to mark the birth of Child Two, and though it has threatened several times since to turn up its toes, it always rallies at the last moment and manages to keep going. It’s several years since it last flowered though, and I was quite perplexed when this bloom opened because I’d completely forgotten what they look like.

While I was thinking about this post I did some research on the Easter (or spring) cactus, and found this helpful page, which has told me all the things I’ve been doing wrong with my poor, long-suffering plant for nearly three decades now. It’s planted in much too heavy compost, it’s generally too dry, except when I remember to water it and leave it too wet, and for quite long periods it has been left on a sunny windowsill over a radiator. Dropping its stem segments right and left. Frankly, it deserves a medal for still being alive, let alone flowering. It’s probably happier than normal right now because I moved it into the conservatory a few months ago – a room we rarely use in the evenings, and which therefore spends the long winter nights in total darkness, and which we only heat enough to stop ice forming on the inside of the windows.

If it survives flowering (never a given with plants that are already stressed), I’ll repot it in looser compost and set it on a humidity tray. Then I’ll speak lovingly and apologetically to it for a while, and see if it forgives me. Watch this space….