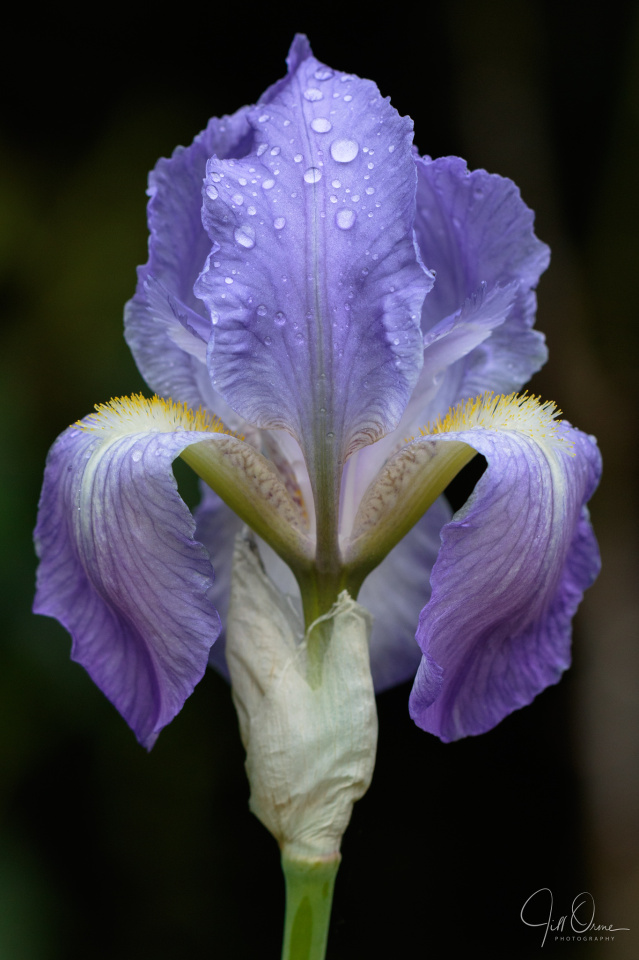 This is this year’s obligatory wet iris shot. Though I don’t rule out the possibility of posting another voluntary one, should we get other days so dark and wet that all the bugs are snug at home with their ‘jamas on and their feet up, reading trashy novels and eating chocolate, and I can’t find anything else to photograph.

The big excitement in the household today was that R left the parish for the first time in six weeks, after we were warned by one of our car manufacturers that, in order to avoid Trouble, the cars should be run for at least fifteen minutes a week. He was out of the house so fast, I wonder he didn’t get a nose bleed. On his return he reported that the roads were only slightly less busy than usual – but let’s be charitable and assume that everyone else who was out was avoiding Trouble too. I haven’t taken the MX-5 out yet, but I’m savouring the prospect.

My discovery of the day was that if you want to avoid Covidiots round here, the best time to take your state-sanctioned exercise is at 8pm on a wet Thursday night. Apart from the moment when I slipped on some mud and nearly fell under the wheels of a fast-approaching Jeep (which proceeded far more sedately thereafter: I’m a kind of public service, really), I had a very peaceful walk. Unlike yesterday, when I asked a couple who were taking up most of the width of the lane if they would move further away, and the woman said, “No.” R has been quite keen to fashion a two-metre pole with a notice on the end saying If I can poke you with this, you’re too close, but I’ve been discouraging him (after all, as Child One told us reprovingly during the last family Zoom, one day this will all be over, but we’ll still have to live here) – but suddenly I found myself sorely tempted by the project. In the absence of something to smack her round the ear with, I confess to having said a Bad Word, which is certainly preferable in terms of criminal liability, but doesn’t exactly portray me in a favourable light. Though on the plus side, I held my breath and didn’t cough over her.

The sooner we can all get back to normal, the better – whatever the new normal turns out to be.