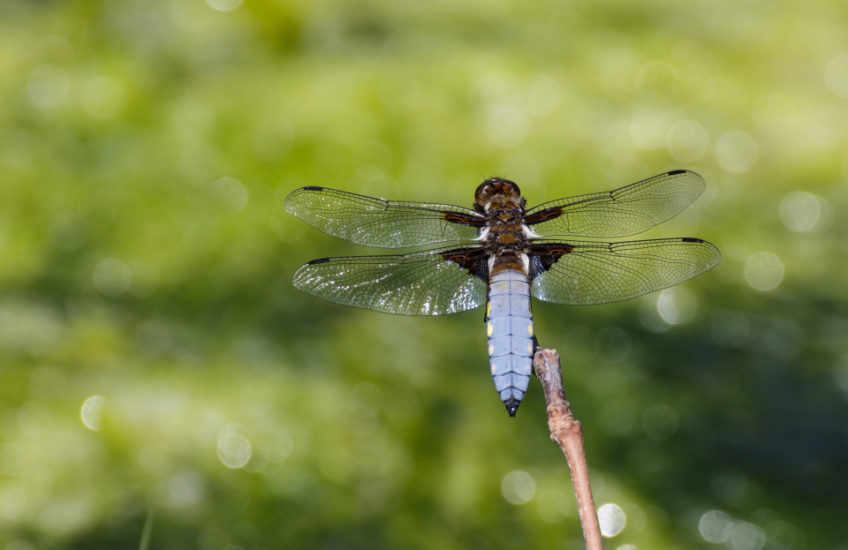 R and I went to Croome this morning, me laden with cameras and lenses. It was an absolutely glorious morning, but by 10.30 it was already getting hot, and promising to be blistering later in the day. We began by walking down to the house, where I was able to point out the summer-resident House Martins and take a few reasonable photos of their antics under the house eaves, and then we strolled on to the lake. At this point we split up: R carried on walking back up to the café, where he settled himself with a coffee and some work, and I re-circuited the lake in search of dragons.

I was initially disappointed, but after a few minutes I found some reeds where there were damselflies patrolling, and began to get some shots; the extra is a mating pair of Large Red Damselflies (Pyrrhosoma nymphula). Sadly I missed the moment when a Demoiselle landed just in front of me – I was so startled, because I’ve never seen one at Croome before, that  I moved the camera too quickly and frightened it away. 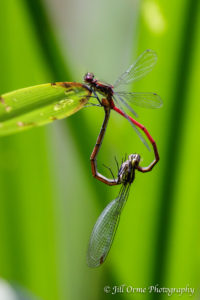 I’d just decided that it was still too early in the season for dragons, and therefore I might as well make my way to the café to join R, when this fabulous Broad-bodied Chaser (Libellula depressa) flew past me at high speed and began patrolling the lake. He was moving far to quickly for me to photograph him in flight – though goodness knows, I tried – but every few minutes he would stop briefly to rest, and by edging carefully as close as I thought I could get away with to the twigs he seemed to favour, I eventually managed get some portrait shots. As if one BBC wasn’t good enough, a female then appeared in the same section of the lake; he grabbed her in mid-air, and there were a few seconds of furious tussling before she managed to shake him off, gather her dignity and leave. Quite by accident I took an almost-focused shot of her in flight, which I count as today’s bonus! 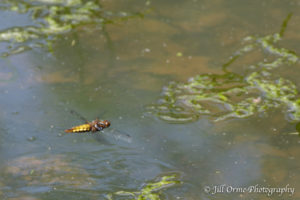