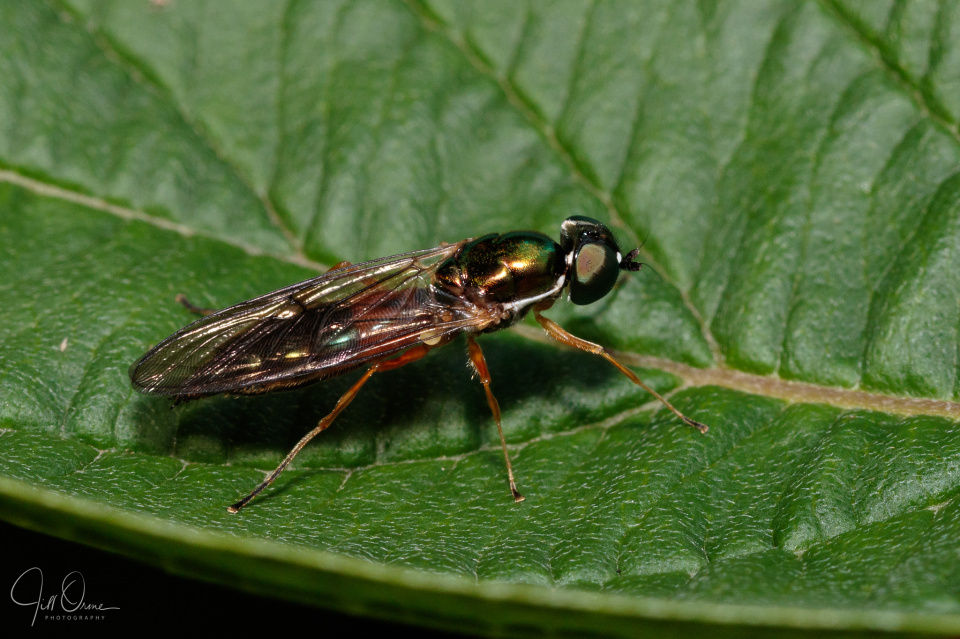 This is a female Twin-spot Centurion – Sargus bipunctatus – which is a large and quite commonplace soldier fly. The term ‘soldier fly’ seems to suggest that they’re in some way dangerous, but that’s so far from being the case that I find it frankly perplexing. Some sources state that the name comes from the fact that all the species are decked out in bright, sometimes patterned, exoskeletons, and look as though they’re wearing armour – but the same could be said of many hoverflies, for example, so I don’t think it really stands up as an explanation. Anyway. Most species of soldier fly have common names that reflect their (spurious) militarism, including the Twin-spot Centurion here.

Both sexes have the paired white spots on the frons, between the eyes, and both have a metallic green thorax and orange legs. Males though are smaller, with a narrow bronze abdomen. Females are both broader and longer, with a hind wing length of around 1cm; there are bands of white hair along the side of the thorax and at the back of the head, and the abdomen is bicoloured, with the base red, and the distal sections black but iridescing blue.

In my fairly limited experience, male Twin-spot Centurions are skittish: I don’t see them very often, and when I do, they rarely hang around waiting to be photographed. Females, though, are remarkably passive and seem to spend a great deal of their time sitting around doing nothing very much, and I had to annoy this one quite a bit before she flew off to another dogwood leaf to get away from me. They fly from August to November, peaking in September and October, and are mainly found in wooded areas (such as our wild garden). Females lay their eggs in animal dung, fungi, or in rotting vegetation, and in gardens they will sometimes lay in compost heaps.

In other news: I still haven’t had the result of my Covid test, and I’ll have to start chasing it soon before I go completely stir-crazy.

In other, better news: A Southern Hawker flew past me this afternoon, while I was photographing less interesting things and mourning the lack of dragons. He didn’t stop for a photo, sadly, but lifted my spirits simply by being.