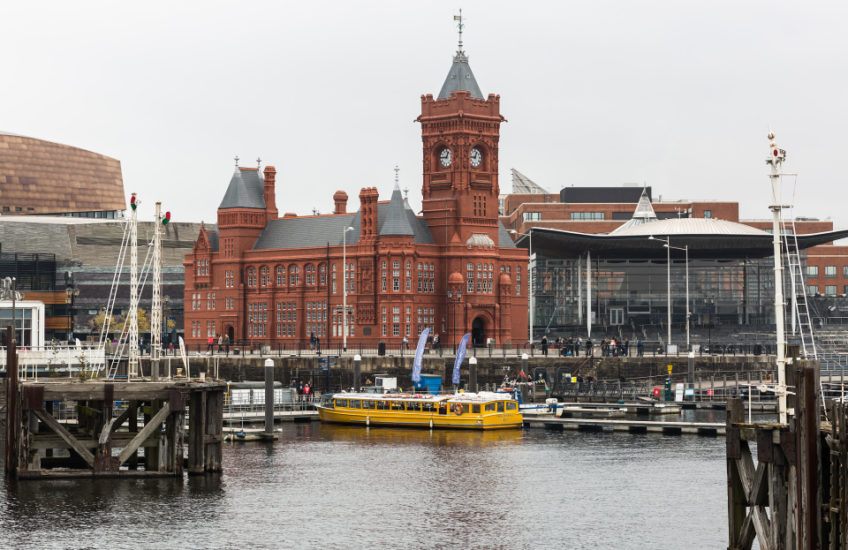 R and I went down to Cardiff this morning, to meet Child One and her young man for lunch. Even though the traffic can be problematic at times, I always enjoy the run down through Monmouth and the Black Mountains – and if the light had been good today the view would have been spectacular, because many of the slopes are covered with deciduous trees which are currently putting on a terrific autumn display. Unfortunately, the atmosphere was thick and murky and visibility was very poor – it put me in mind of Guy Garvey, who once said that living in Manchester was like being inside a sealed Tupperware box.

We arrived at Cardiff Bay a few minutes early and went for a stroll so I could take some photos, from which R has chosen this one, not for the Tupperware light but because it shows some interesting features. The Victorian Gothic building in red brick is called the Pierhead Building; it was built for a dock company at the end of the C19th, but now belongs to the National Assembly for Wales, and houses a museum and exhibition and assembly spaces. There is more information about it here. The building with the wavy roof to the right of it is the Senedd, which is where the National Assembly for Wales meets; and the roof you can partly see on the far left of shot and running away behind the Pierhead Building belongs to the Wales Millennium Centre. The wooden structures sticking out of the water are mooring dolphins, of which there are a number in the Bay.

I’ve added an extra, which I took less than two hours later when we came out of the restaurant into bright sunshine – I thought you might like to see a very similar view in less depressing light! I was briefly optimistic that we might have a sunny drive back into England, but sadly by the time we reached Newport the lid was firmly back on our box, so we took the shortest route home rather than the most scenic. 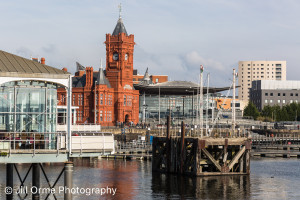 There are four more views – two drab and two bright – on Flickr. The Norwegian Church in the fourth shot is now an arts centre.