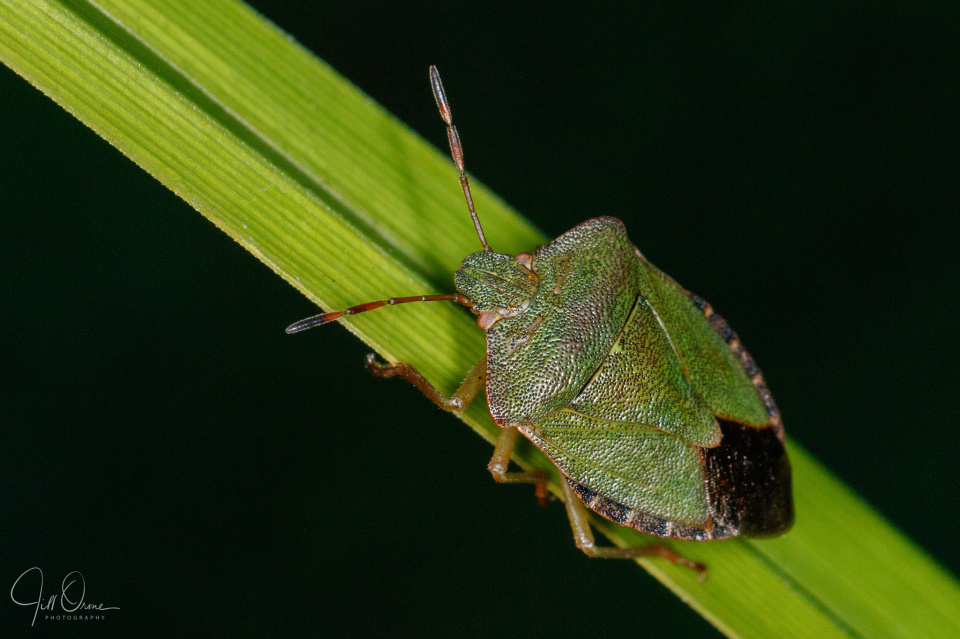 To be more accurate, I was beetle and bug hunting, these being the easiest invertebrates to find at this time of year. Beetles were thin on the ground today though, and especially thin up in the trees and bushes where I concentrate my searches – I tend to think that by the time they’re down on the ground, in grass tussocks or under garden debris, they’re trying to hibernate, and I should leave them to get on with doing it. There were a few nice bugs around though, and here are two of them.

I was surprised to read that although it’s a native species in the UK, until a few years ago the green shieldbug was confined to southern England. It’s yet another beneficiary of climate change though, and is now marching steadily northwards. In its wake another species, the southern green shieldbug, is moving into the south of the country from the Continent, but as far as I know that one hasn’t yet reached the Shire. Both are sap suckers, but the native (sometimes called common) green shieldbug isn’t considered to be a pest, even by keen gardeners. Its European cousin can be more problematic, but it tends to arrive here at the end of the growing season, so hasn’t yet had war declared on it.

I usually find green shieldbugs on my hazel trees, this being one of their favourite larval food plants, but they will eat a variety of plants and can turn up almost anywhere: this one was on an ornamental grass by the wildlife pond. Adults are quite large by bug standards, at around 12mm in length, but their colour can still make them tricky to spot when they’re in shade. This one is starting to move from its bright green summer colouration to the bronze livery they adopt before going into hibernation. When they emerge in the spring they rapidly turn green again before going off to look for a mate. 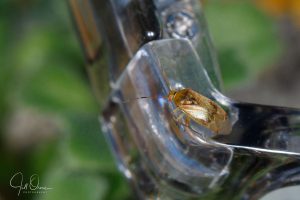 The extra is the oddest photo I took today, but I think quite interesting. I was walking back home after touring the village on my bug-and-beetle hunt, when something flew towards me and landed on my glasses, so I carefully removed them and put them on top of the garden wall to see what it was. Except by then, of course, I had no glasses on, so I could only make out a vague blur. Luckily the camera came to my rescue, and revealed a little plant bug called Pinalitus cervinus – it’s about 4mm long, and is mainly found on hazel and ivy. In fact I’d been trying to photograph one on ivy earlier, just down the lane, but it had been highly uncooperative and I’d only managed blurry record shots. I like to think that it had a fit of conscience as I walked away, and pursued me to make sure I got a better photo. Or maybe I’m a bug whisperer and I never knew it….

I see that today is the 17th anniversary of the founding of Blipfoto. I’ve only been here seven and a half years, but that in itself is fairly remarkable, because when I began my journal in May 2014 I only intended to use it to motivate myself through a 365. Having completed that project though, I never quite got round to giving up the daily photo habit, and this is my 2703rd entry. I owe Blipfoto a lot: I’ve gained both LRPS and CPAGB during the time I’ve been blipping, and I’ve been successful in competitions and in getting my work into exhibitions – none of which I’d even have thought of attempting a decade ago. More importantly, I’ve become fascinated by wildlife and the challenge of photographing it, and when I’m asked what I do I now have the confidence to describe myself as a nature photographer and blogger. Thank you Blipfoto – and many happy returns!