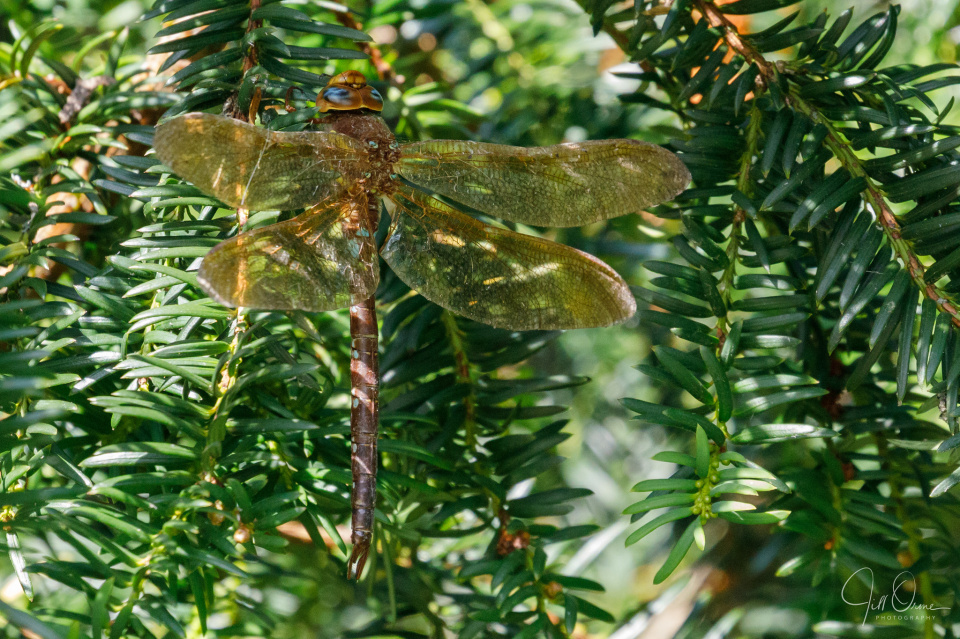 If R and I hadn’t happened to see him fly into this yew tree, we never would have spotted him. As it was, he was so well-camouflaged that when I approached the tree I struggled to find him, and the camera had a conniption when I asked it to take his photo, and did that whirry, in-and-out, not-finding-focus thing, until I gave up asking and just focused manually. Luckily I’m not having as much trouble doing that with the big rig as I am with the 7D and macro, and this is therefore as sharp as I could reasonably have got it, given the distance and angle involved.

Amusingly, he flew past us just as I was explaining to R that Brown Hawkers are tricky to capture because they rarely perch, and when they do it tends to be in trees, so when this happened, R said, “OK – you can rest your case!” I think that may be why he’s chosen this image for my post today, because he’s not usually a fan of busy backgrounds. The other contenders were all shots of some of the many Migrant Hawkers that were working the lake and river at Croome this morning – the most interesting of which I’ve posted to Facebook, if you’d care to take a look.

Because of their speed and general tricksiness, every time I manage any kind of photo of a male Brown Hawker I say the same thing: one day I’ll get a really good shot of one, and though this isn’t it, it will do for now. Females are easier, simply because they have to come down to oviposit, but I believe that this is the first time I have ever caught a male on a perch. Even though he’s pretty worn, I still think he’s handsome – those bright blue patches on his abdomen, blue wing nodes, and the blue streaks in his eyes are really stylish accents against his general brown colouring. Even in flight these blue details make it fairly easy to distinguish males from females, which are thicker in the abdomen, and have little or no blue on them.