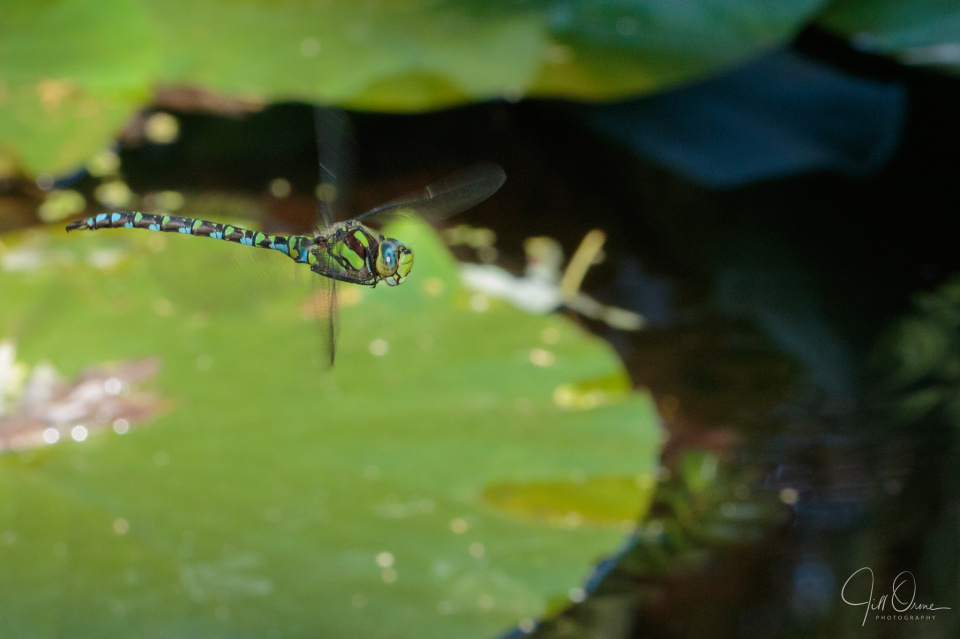 The Offspring were around for much of today, which gladdened their Ancient Parents’ hearts, but didn’t allow me much time for photography. It was nearly 4pm when I ventured out into stifling heat with the camera, only to find both the front garden and Tilly’s field completely devoid of bugs – they had more sense than I did, it appeared, and had found themselves some shade in which to lurk.

I was already melting into a sticky puddle, but needs must, so I wandered down the lane to our neighbours’ pond, and found that this handsome male Southern Hawker had staked a claim to it as his exclusive territory. By this time the pond was largely in shade, which gave me an issue with ISO and shutter speed; but I realised that he tended to overfly this lily pad, which happened to be sitting in a shaft of light, so I exposed for that, pushed the ISO as high as I dared with this camera, and hoped for the best.

Speaking of hoping for the best: I’ve recently come up against the rather depressing issue that I’ve now reached the far end of the available diopter adjustment on the 7D, and I’m now so long-sighted that I could really do with an extra notch – so I can’t absolutely trust what I think I’m seeing, in situations like this when I have to focus manually. I’ve been meaning to try to learn how to use this camera with my reading glasses on and the adjustment pushed the other way, but haven’t yet got round to it. So the only available solution today was to shoot on high-speed burst while focusing through the subject – which if I’m honest isn’t the most efficient or effective way of getting well-focused images of subjects in flight.

Given all of this, I can only thank Mr S. Hawker for his diligent patrolling, which over about quarter of an hour allowed me to shoot all of half a dozen just about acceptable frames.