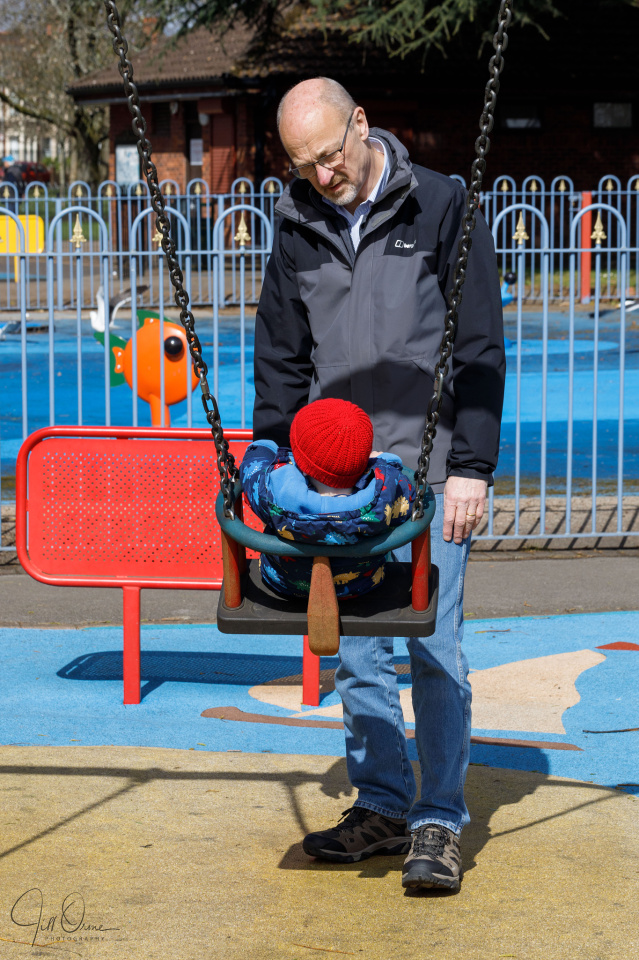 As you can see, R isn’t besotted with his grandson at all.

We had a great day with the Boy Wonder today – he was funny and charming all day. The games he’s making up are becoming more and more elaborate, and he always seems to follow his own self-imposed rules for them, which is fascinating to watch. Today there was one which involved placing shapes on a shape sorter, then removing them and placing them separately on the ground, then getting on his rocking whale and rocking a few times, before getting off, collecting the shapes, and replacing them on the sorter. After several rounds of this, a new variation was added which involved him getting back on the whale while holding the shapes, before dismounting and putting them back on the sorter, and it was clearly important that all these stages happened properly and in the right order.

He’s delightfully cuddly at the moment, with both his people and his toys – even a wooden pull-along dog had several cuddles today, and so did the picture of a duck in his favourite book. The quacking that a duck says (“A, a!”) can now reach a fairly epic level of volume and insistence, and it’s a vocabulary that’s shared by dogs and gulls in the park, and indeed, by most other representations of animals. Only lions, which say “Raar!”, and fish, which make a popping noise with a finger in a cheek (a rod I managed to make for my own back, that one) have a separate language of their own.

His walking is progressing nicely, but he still prefers to get along either by crawling, or by walking on his knees in the manner of a 1970s comedian pretending to be Henri de Toulouse-Lautrec. This knee walking, which is surprisingly fast, is usually done half sideways, with a lot of arm jiggling that makes it look rather as though he’s dancing.