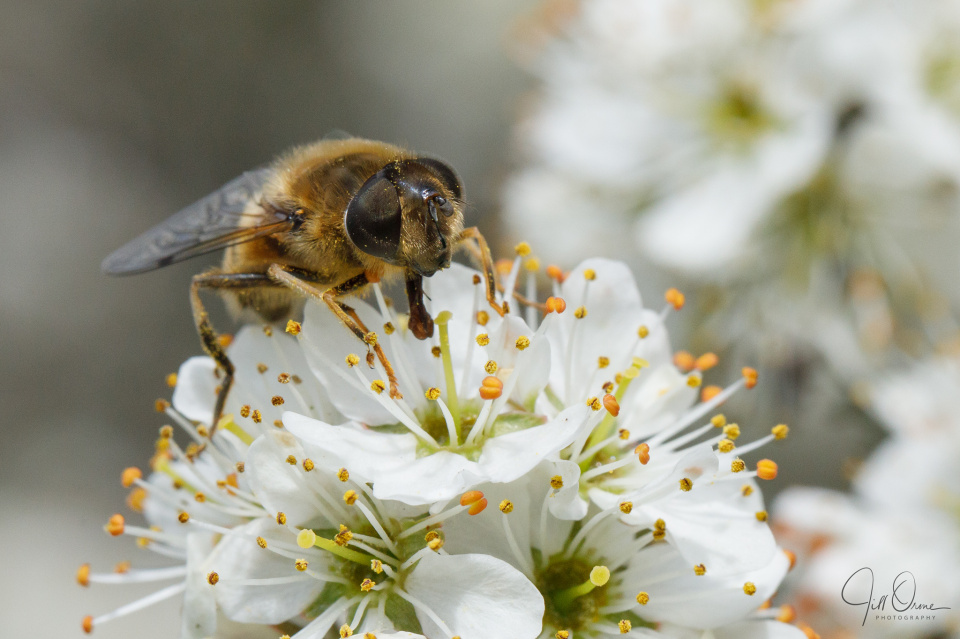 Today was a day of two halves. This morning was warm and bright, with very little wind, and there were so many invertebrates flying that when I went out walking with the camera that I hardly knew where to point it first. This afternoon the wind got up and the weather turned changeable, and in short order all the inverts disappeared back to their shelters. Luckily though, I’d already recorded some season firsts: a Helophilus pendulus and a Sphaerophoria scripta for Team Hoverfly, and for the mining bees, what I think (though it’s yet to be confirmed) was a male Andrena flavipes.

In Tilly’s field this morning, where the hedgerow is full of a mixture of blackthorn and either wild damson or bullace, and the blossom has thus far survived the wind and rain, I spent a contentedly mindful hour wandering around photographing the many bees and hoverflies that were browsing for nectar and pollen. I also had an unexpectedly close encounter with a Peacock butterfly – it was too busy feeding to have noticed me, and I was too busy looking for much smaller things to have noticed it, and we frightened each other half to death when we almost bumped heads. I think I may actually have said “Waaah!” as it fluttered up into my face, and I’m sure the Peacock was thinking much the same, but I took a couple of quick steps backward and apologised for disturbing it, and it quickly resettled and continued feeding. Sadly it was on a rather dreary section of hedge, with more ugly tangled twigs than flowers, so the photos didn’t please me as much as the sighting.

After havering for far too long this evening over the choice of images for this post, I’ve finally gone with this shot of a female Eristalis pertinax because it’s a little unusual for me in being almost face-on. Normally when I photograph insects I’m trying to get as clear and descriptive an image as possible for recording purposes, and that tends to need a dorsal or side view, rather than a face shot. This photo was taken for my own amusement, as the hoverfly stomped determinedly over the top of the blossom cluster towards me, and it works for me as a memento of my late morning hour in the sunshine, with all the pollinators humming in their individual keys along the length of the hedgerow. As a bonus though, it happens to be quite descriptive of the species: Eristalis pertinax is defined by a narrow black stripe down the centre of the face, by yellow (as opposed to black) tarsi on the front and middle legs, and by a two-tone hind leg, and all of those features are visible here.