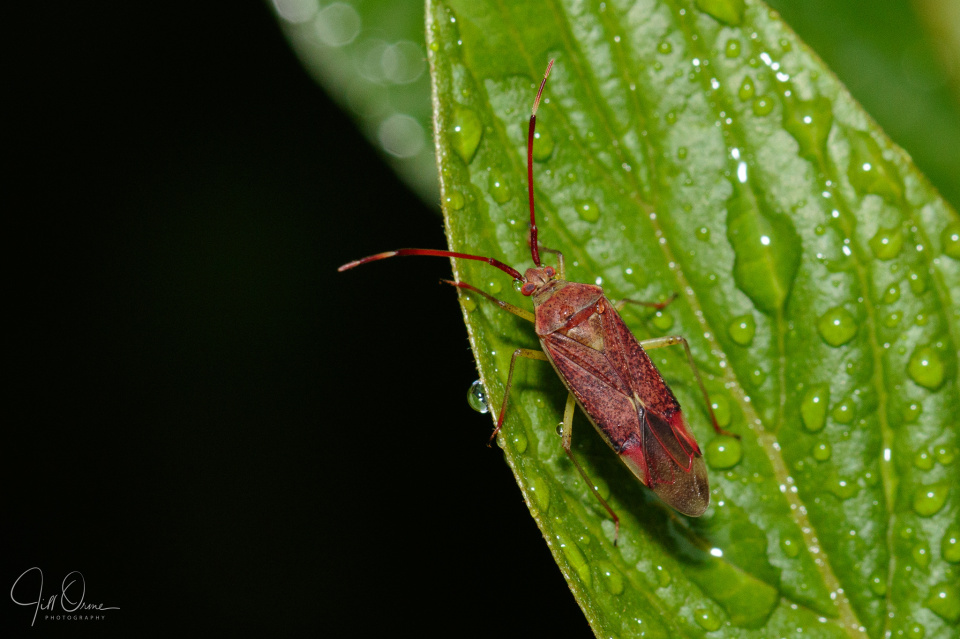 I only had a few minutes early this afternoon, between the heavy rain stopping and the deadline to begin making lunch so that R and I could eat before our family Zoom call, to get out into the garden with the camera. I wish I’d been able to capture this bug without flash, because the reflected highlights bug me (arf, arf), but the light in this corner of the far garden was Stygian and the wind was gusty, and without some flash assistance I don’t think I’d have got an in-focus shot at all.

This is Pantilius tunicatus, a late season Mirid bug that feeds on hazel, alder, and birch, and is usually to be found on their lower branches; this one though, was sitting on a dogwood leaf. Dogwood is inexplicably popular with a wide range of insects in our garden, and this patch has become one of the first areas I check whenever I’m hunting invertebrates. Every couple of weeks it provides me with an insect I’ve never photographed before  – or at least, not here – and this was one of those occasions.

Pantilius tunicatus isn’t at all rare, but I’d never seen one before – probably because this is the first year I’ve searched the garden for invertebrate subjects right through into the autumn. It’s a bug that emerges in August and peaks in September, but it has been recorded as late as November, and it’s thought that some adult specimens overwinter. Freshly emerged adults tend to be much greener than this, but they become darker and more obviously red as they mature, which may be why some sources give it the common name Blushing Plant Bug. It’s often described as large, but that’s a very relative term, of course: it’s about 1cm in length.