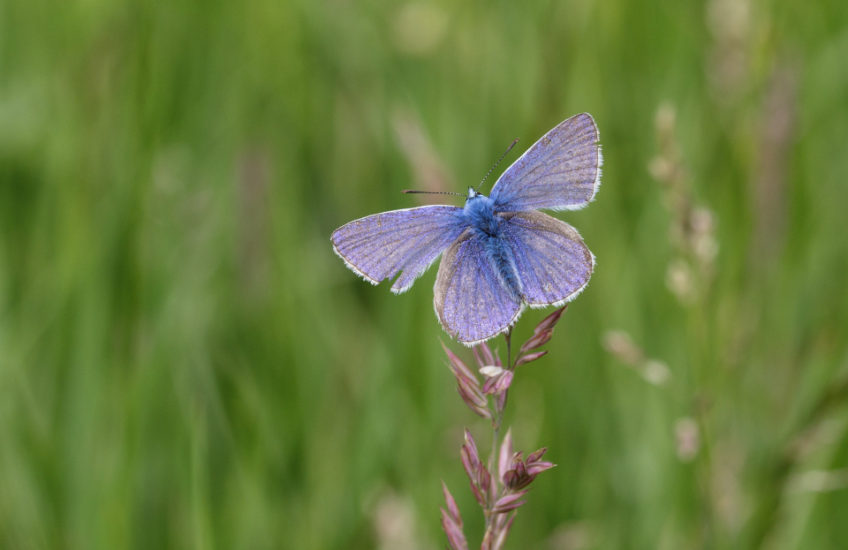 After a morning’s admin, I joined R in the garden, did a little emergency cutting back and staking, and then took the camera and went on a bug hunt. As well as the usual suspects, my session yielded two species of bee I’ve never recorded before, and three different types of shield bug; but the most noticeable thing was a sudden increase in the number of butterflies in the village.

The garden yielded a Red Admiral, a Speckled Wood, and a Meadow Brown (my first extra today). 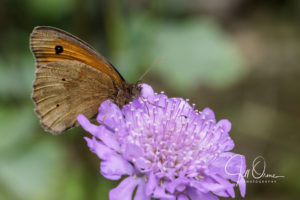 I then went a little way up the road to a meadow I still call “Tilly’s field”, after the old mare which was grazed there, but which died several years ago now; this year the owner has cut back the footpaths which run through it but left the rest of the field unmown, and the mixed grasses and wild flowers, including trefoils and vetch, were being browsed by a number of Meadow Browns and Ringlets. I estimate that there were at least twenty of each species, and despite the fact that it’s a large field they were being quite competitive and territorial. Because both species tend to go to ground and I didn’t want to trample the unmown area, I struggled to get anything other than record shots, but in case it’s a species you don’t know I’ve put in a photo of a Ringlet as a second extra. 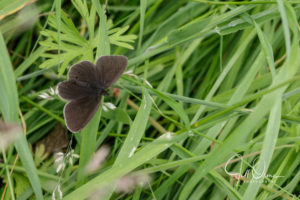 I was heading back towards the gate when I saw a Meadow Brown being chased away by this rather faded and tatty Common Blue (Polyommatus icarus), which was determinedly patrolling a small area on either side of the path. Even though he wasn’t at his gorgeous best I wanted to photograph him because he’s the first Common Blue I’ve seen this year, but he really wasn’t keen, and because he was small I kept losing him among the grasses. Persistence paid off in the end though, and of all today’s photos R has chosen this as his favourite. Please look full-screen, if you have the time.

This is a first brood male, which means that he will have overwintered as a caterpillar before pupating in the spring. Even though I hadn’t seen him before today he could have been on the wing for about a month already, and he’ll now be coming towards the end of his life. He’s chosen his territory well, because female Common Blues are very choosy about the plants on which they lay their eggs and especially favour trefoils, so if he’s found a willing female she’ll have had a good choice of food plants for her young. Assuming that this meadow isn’t cut before then, the second brood adults should emerge about a month from now and will fly until September; in a good year there can be a third brood, but I doubt that will happen this year.