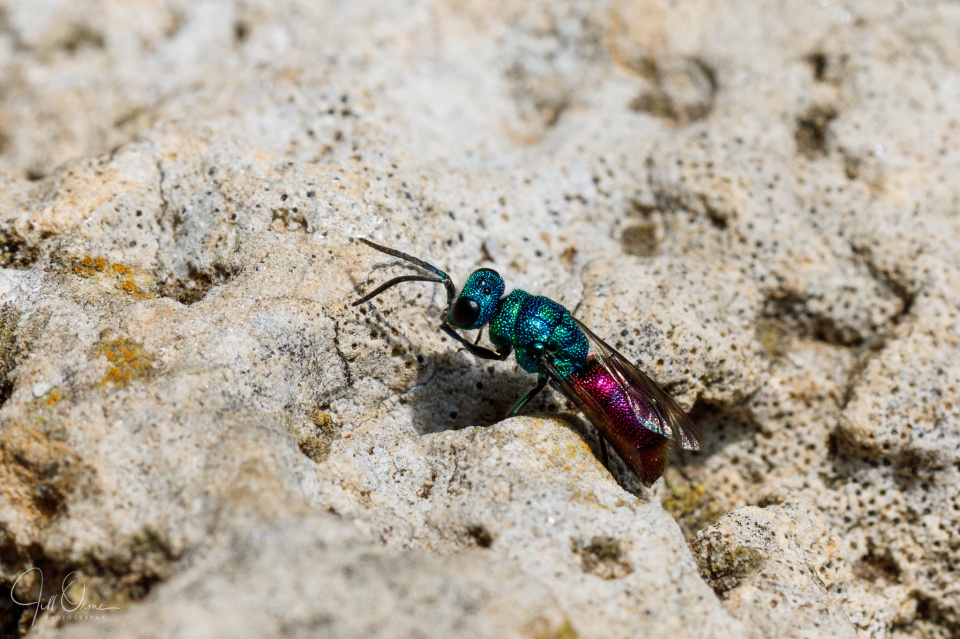 I went to Croome this afternoon, in search of Odonata, but only spotted one Large Red Damselfly. Croome though (despite the apparent determination of the current managers to mow, strim, prune, and clear out the waterway, to the point at which it’s hard to see how invertebrate life will survive there) continues to find ways of giving, and today it gave me my first ever photo shoot with a ruby-tailed wasp.

I was wandering along the edge of the lake towards the grotto, which has always looked to me like a cheap tufa construction, but was actually made in the late C18th from (probably quite expensive) vermiculated stone, and as I approached it occurred to me that it’s almost custom-designed to be a solitary bee hotel, so I stopped to examine it. Sure enough, there were hairy-footed flower bees, mason bees, miners, and nomads flying all around it and disappearing in and out of cracks and crevices. So far, so interesting. But then I caught a flying flash of metallic turquoise and cerise, and immediately realised that I was in the presence of a long-time target species.

I was genuinely so excited that I could barely breathe in case I upset my subject and caused it to leave, but in fact it was completely uninterested in me, even when I got in close with the macro. It was amazingly restless and fast though: fifteen quite warm minutes later I’d taken over 150 photos of it, but most are either frankly out of focus, or at least have significant motion blur, and I’ve already culled most of the files. Allegedly though, you only need one (cue most of my macromaniac friends shaking their heads in bewilderment at such a bizarre concept) – and for a first attempt, I’m not unhappy with this.

I can’t tell you much about this wasp, because we have several similar species in the UK and they’re very difficult to distinguish from photos, but they’re all cleptoparasites of solitary bees or other wasps. The commonest is called Chrysis ignita, and parasitises the nests of red mason bees; there’s a nice blog about it here. 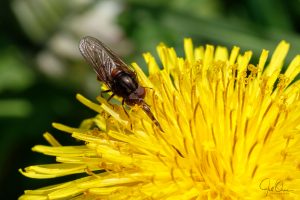 My Tiny Tuesday extra shows something that’s even smaller than the 12mm wasp: a Rhingia campestris hoverfly comes in at less than a centimetre in length, unless you count its absolutely awesome proboscis. Some people call this the Heineken hoverfly, because it reaches the parts that other hoverflies can’t reach, but I’d always assumed that was a reference to its little snout, which it doesn’t actually push into flowers, so I’ve never used the term. Today though, after watching this specimen eating from the centre of a dandelion while sitting on the outside edge, I think I finally get the joke.