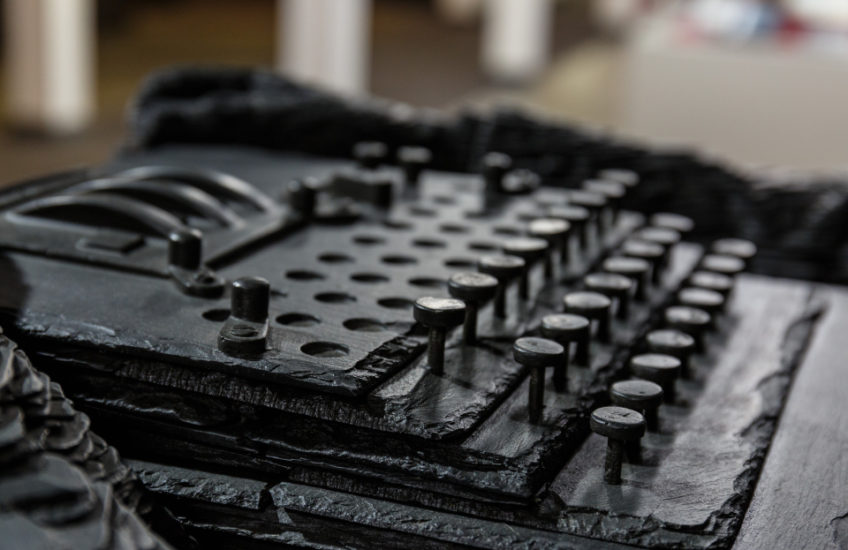 R and I went over to Bletchley Park today; I had already rushed around the museum on a Blipmeet last Spring, but R had never been before and we thoroughly enjoyed taking our time and exploring some of the fascinating displays. By the time the site was getting ready to close we were both suffering from information overload, but there were still sections that we hadn’t had time to visit so we’ll definitely be returning.

I’d intended to take photographs as I went around the site – there are authentic artefacts on display in the codebreaking huts, as well as a replica Bombe machine which was painstakingly reconstructed by volunteers from old diagrams and photos of the originals (these having been completely dismantled for security reasons at the end of the War) – but I was simply too interested in what I was seeing to remember to pick up the camera. I took a total of ten photos all day: two of the lake, and eight of this slate statue of Alan Turing.

I’m almost certain that I blipped a wide view of the statue on my last visit, but it’s a remarkable piece of art – and of course commemorates a man whose contribution to the work done at Bletchley Park, and to the development of the computer, was beyond measure or price. His death by self-administered cyanide poisoning, after a conviction for gross indecency led to chemical castration and to the removal of his security clearance and the destruction of his career, is almost too awful to contemplate.

The statue is worked in Welsh slate, and is the work of the sculptor Stephen Kettle.

By the time we had arrived home and had dinner it was too late for me to go out again to this week’s BGCC print competition; but I heard later from LooseCanon and from someone else that this image came second in the Little Girls’ Class – so I’m pretty pleased about that!