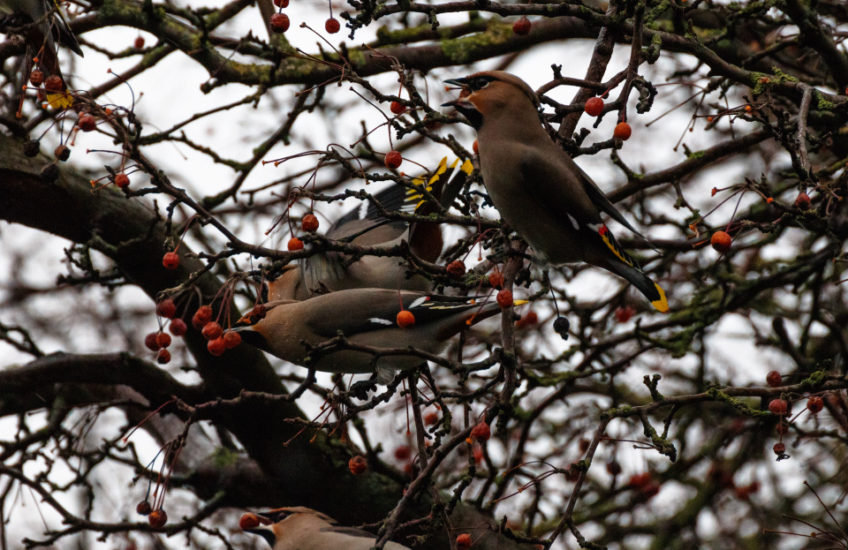 I’d never seen a Waxwing other than in photos, so after reading Hillyblips’ posts over the weekend I did a little research into where they’d most recently been sighted, came up with three addresses in Gloucestershire and decided that I would venture out in search of them myself. The weather was horrible this morning, but the forecast promised that it would improve, so I threw the 7DII in the car, put the nearest postcode into the satnav and zoomed off – more, I must admit, in hope than expectation.

When I arrived in Cheltenham it was still raining, and not only were there no waxwings in evidence, there were no togs or birders either. My spirits sank, but I pulled the car into a layby and prepared to wait for a while to see what might happen. Only a couple of minutes later another car pulled in behind me, and a chap emerged with a camera and a Very Big Lens – just as a small flock of birds hove into view and descended on a rowan tree. Within a couple of minutes some more people arrived, and those who hadn’t already seen the birds in better light over the weekend were soon firing away.

The hardier of us stuck it out for about an hour, during which time the Waxwings mostly just sat (wittering) in a nearby tree and suffered the biting wind and occasional rain flurries, as shown in my first extra; every now and then they would make a lightning raid on the rowan, grab a few berries and retreat to their perch. They didn’t seem bothered by all the cars on what is quite a busy road, and they were unimpressed by humans on foot, but they did all lift off when a large truck went past them, and they were also put up a couple of times by some harassing gulls. 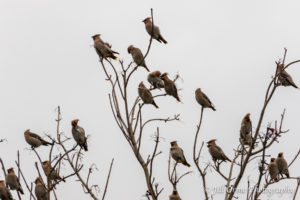 After about an hour the flock suddenly disappeared, and as I was cold and slightly damp by this time I drove to a nearby shopping complex for coffee and cake. I hadn’t been intending to go back to the birding spot afterwards, but in the event I found that I couldn’t resist taking one more look – they’re really very charming little birds, and it could easily be several years before I get the chance to see them again. Back at the layby the flock was back in place but it was raining with real determination, so I waited in the car until it eased a little and then went as close as I could get to the birds for a final set of shots. Just as I was starting to worry about how wet the camera was getting they launched another berry raid, so I rushed after them and caught a few close-ups – including the main image and the second extra. 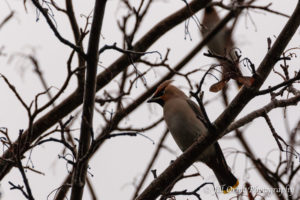 I hope these aren’t the best photos I ever manage to take of these lovely birds, but considering the horrible conditions I’m reasonably happy with them for a first attempt. As I was driving back home I glanced westwards and saw that the sky was clearing (as promised by the forecast, though several hours late), so if I’d just hung damply on for another half hour I might have had some late light to shoot by – but such is life!