When I saw that it was bright this morning, I thought that it was worth another quick trip to Cheltenham in the hope that the Waxwings would still be there, this time trying out the Big Lens on the 7DII. I’m pleased that I did, because the better light and better lens combined to produce much higher quality images.

From the Waxwings’ perspective I’m not sure that the conditions were very much better than on Monday, because it was bitterly cold and fiercely windy – every time the flock took off it was buffeted about and struggled to land again. I have several shots in which it’s clear that the poor birds are literally clinging to the branches of their chosen tree, and in my first extra you can see how the wind is riffling the feathers of the bird on the right. 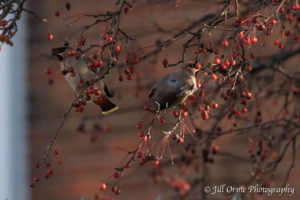 I’m very happy to have seen these charming birds again, and with my day’s output. There were a couple of birders there with Even Bigger Lenses, but to be honest I’m not sure I could have controlled an EBL in these conditions – as it was I had to push my shutter speed quite high just to counteract the swaying of the trees and the movement of the lens every time a gust of wind caught them. Incidentally, one of the birders (all of whom were very friendly) told me that the Waxwing gets its common name from the flashes of red at the ends of its flight feathers, which to a fanciful mind look as though they’ve been dipped in sealing wax. 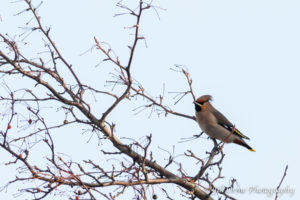 I’ve put some more of today’s favourites in an album on Facebook, if you’d like to see more.