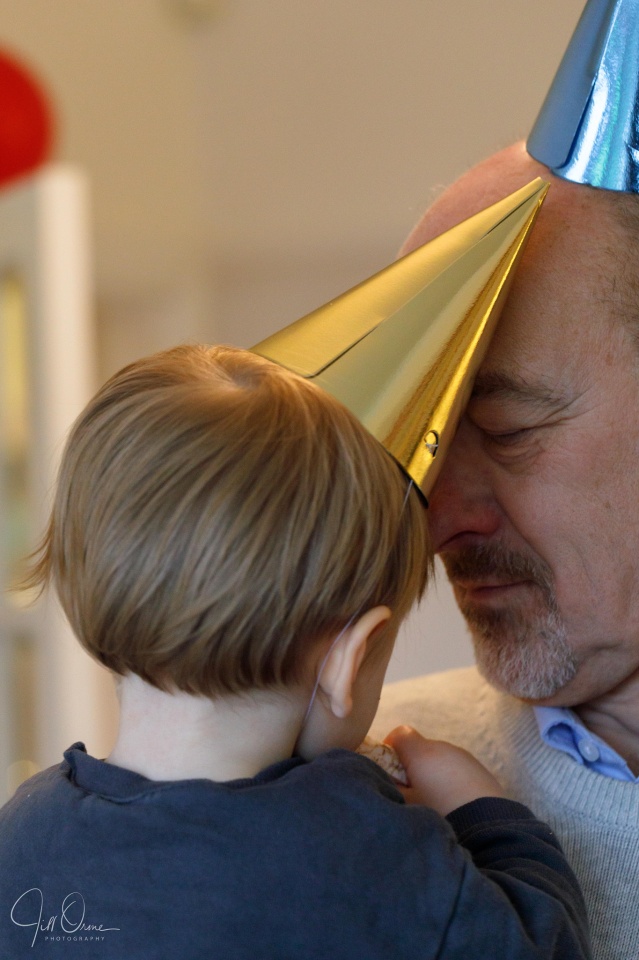 R and I have been together for 35 years now (“…and it dooon’t seem a daaay tooo looooong…”), and I genuinely can’t remember ever seeing him wearing a party hat before. But if there was ever going to be someone for whom R would unhesitatingly and uncomplainingly don a stupid hat, Baby B would be that person.

The Boy Wonder achieved the marvellous age of 1 today, and accordingly all four of his grandparents gathered at his home to worship and adore. Once again B was a complete star – it’s pretty clear now that he likes to be in a situation where there’s a lot going on – and had us all in fits with his antics and pranks. He very much enjoyed opening and exploring some of the presents he’d received, and was even allowed a taste of vegan birthday cake – which he initially spat out as being strange, but after consideration decided was interesting enough to be worth eating.

This evening L sent a brilliant little film around the family, consisting of one or two seconds from every day of B’s life so far. R and I watched it together, and I don’t think I was the only one on the sofa who got a bit misty-eyed. We’re in complete agreement that this has been the best New Year’s Eve ever.

At 11.50pm on the last day of 2021, I’d like to thank everyone who reads this journal and continues to encourage my photography and my blathering, and to wish you all a peaceful, happy, and healthy New Year. See you in 2022!!