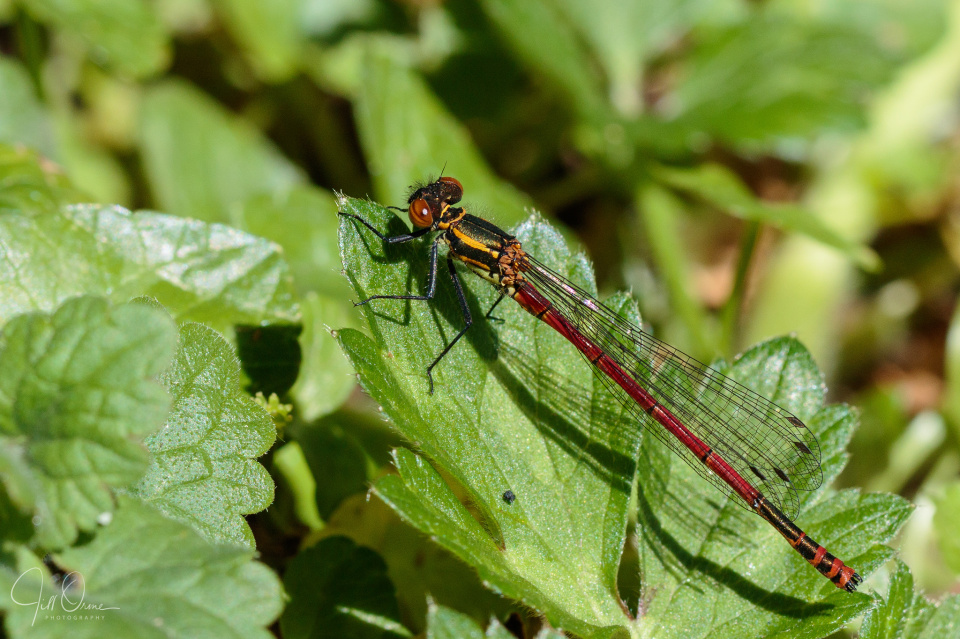 In the world of insects, of course, “large” is a relative term: he’s only about 3.5cm from frons to claspers, but he’s bigger than a Small Red Damselfly would be, and by dint of slow and careful stalking I managed to get close enough to make him look reasonably big. That wasn’t as hard as it might have been, because Large Red Damselflies aren’t especially skittish – some of the blues make the leap into hyperspace if you even think about approaching them – but he’s still pretty fresh, and that in itself can make a damsel flighty, so I only went in close twice and then left him in peace. The last thing I want is for our garden to get the reputation of being Odonata-unfriendly.

When I first saw him, his orange shoulder stripes fooled me into thinking that he was the same female I posted just over a week ago, but once I had the photos up on a decent screen I realised my mistake. If you compare the two images you can see that the female has different abdominal markings, with black and yellow bars between her abdominal segments, small black marks on the top of segments S2 to S6, and more extensive black on segments S7 to S9. The male here only has faint traces of yellow on his abdomen, and the dark markings on S7-S10 are bronze rather than black. He’s also slimmer than the female, though the different angles of the photos make that harder to see, and the clincher – or clasper – is that his anal appendages are designed for grasping hold of the female during copulation, rather than for depositing eggs. The shoulder stripes of both sexes will darken to red as they mature, and their eyes will darken too. In the end this male will be black and red all over, except for the cream undersides of his thorax, but the female will continue to appear tri-coloured.

Trail cam – nothing of note.

Ponds – both are now becoming very murky, after staying remarkably clear for several weeks, and are desperately in need of more plants to balance them. We still have quite a large order outstanding with the Leicestershire nursery, which is reported as likely to be despatched next week. I may have to try to source some barley straw.