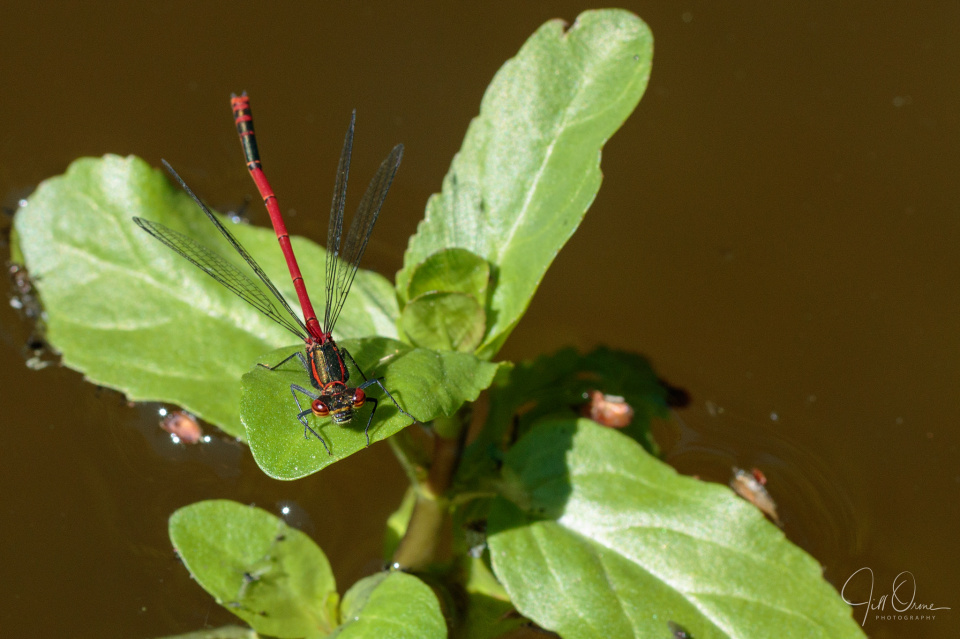 It’s been a day of great excitement here in the Shire – well, in our little corner of this valley, anyway.

I’m posting three extras this evening, two of which are photos taken by the  trail cam early this morning. The first is a rather handsome fox – I think the same one who appeared on camera at intervals through the night – checking in to see if there might still be any hedgehog food left for his breakfast. The second is a muntjac, which wouldn’t be especially surprising except that it’s a buck – not the first time I’ve ever seen a male in the village, but definitely the first record for our garden. 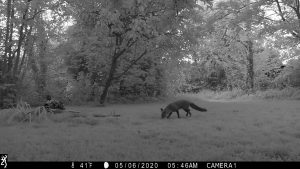 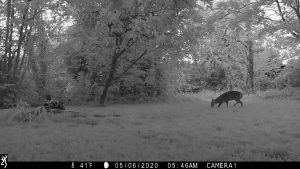 Following on from the fun of viewing the trail cam photos, I spent much of the morning slaving over a hot internet connection, looking for a supplier who might be able to send something out quickly to help us balance the wildlife pond (and failing) – only to discover, when I went down to the wild garden at lunchtime, that the water was noticeably clearer than it’s been for the past couple of days. That in itself was cause for celebration, but better yet was the realisation that the water is now teeming with invertebrates, including what I’ve since been told are mosquito larvae. And I’d barely finished thinking Odonata food! when this male Large Red Damselfly began flying circuits around the pond, and bickering with the resident male sun flies for possession of the brooklime. He’s not the same individual I photographed yesterday: his shoulder stripes have darkened to red, showing that he’s fully mature and waiting for a wife. His abdomen is permanently slightly crooked, probably due to some difficulty when he was emerging, but it’s unlikely to stop him mating successfully.

And then, as I was photographing the damselfly, another movement caught my eye, and I realised that there was a frog in the pond. A frog! In our new pond!! I was pretty concerned actually, because it had seen me too and was making frantic efforts to get out via one of the steeply sloping sides (see the third extra), and I know that even frogs can drown if they exhaust themselves, but I couldn’t see how I could steer it in the direction of the steps. R came and looked at it too, by which time it had dropped down onto the shelf below to hide from us, but after a discussion we decided that in the absence of a net we really had no choice but to leave it to its own devices. Which we did, and when I next went to check on it half an hour later it had found its own way out and disappeared. 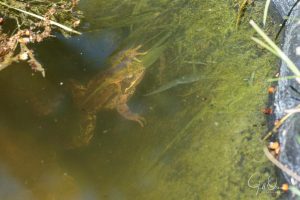 And as if all of that wasn’t enough, I also had a really good hoverfly day, adding two more species to my garden list for the year, and seeing a female drone fly making oviposition passes over the pond. I’ve put the hoverflies of the day on my Facebook page, if you’re not already exhausted.