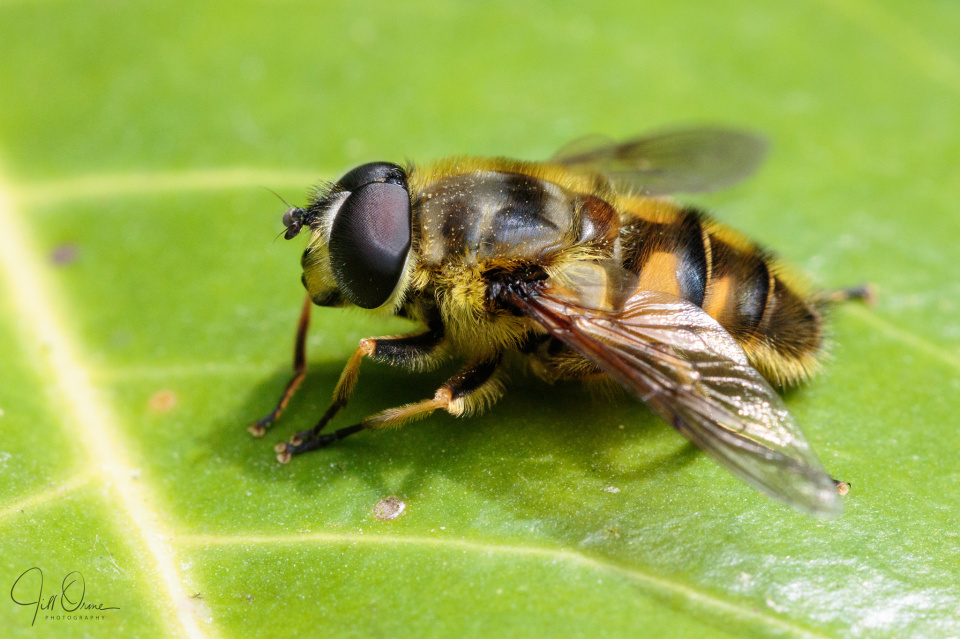 The common name of the hoverfly Myathropa florea comes from the grey and black marking on its thorax – more clearly seen in today’s extra – which (for those of you with active imaginations) is said to resemble the logo on Batman’s costume. I tend to recognise it first by its attitude, which is irritable: it flies fast and lands hard, with a sometimes audible thump, shaking the perch it has chosen. When approached it will lift off, but usually only flies a short circuit before flumping back down in its previous position. In woodland, males will hover at around head height, looking for females but also checking out any other intruders into their territory. This one treated my attentions with grumpy disdain, allowing me to get right in to the minimum focus distance of the macro. 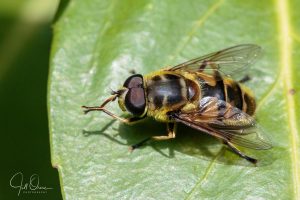 Straight after breakfast today R and I went to retrieve the memory card from the trail cam, but sadly last night’s photos were a little disappointing, the best of them being a couple of shots of a grey squirrel drinking from the pond, and then perching on the log pile. But we knew that it could take a while to capture anything really interesting, so we’re not disheartened.

My lockdown fun of the day came courtesy of a new phone app: this morning I was watching the Self-isolating Bird Club live stream (available on Twitter and on Chris Packham’s Facebook page) and they had a feature about useful apps for identifying and recording nature and wildlife. You might remember that I said a couple of weeks ago that I planned to participate in the BSBI Garden Wildflower Hunt, but I haven’t yet submitted a list to them, because I’m no botanist and my plant ID skills leave – well, almost everything to be desired, if I’m honest. But thanks to an app called Seek, which I downloaded following the live stream, I now have a list of 65 species, and supporting photos, ready to upload as soon as I’ve cross-checked the identifications against a couple of actual books. It’s a pretty straightforward app to use, though it can take a few attempts to get the phone camera into a position where it can “see” the plant well enough to identify it to species, and there are some types of plant that it struggles with a little – docks and willowherbs seem to be especially tricky, for instance. But I think it’s a remarkable piece of software, especially given that it’s entirely free; it can also identify other things, such as fungi and even insects, by the way, though the chap who reviewed it said that plants are its strength. I’m finding it a good learning tool, and using it is extremely addictive – I walked nearly 5,000 steps around the garden today, looking for things I hadn’t yet logged, and I’ll probably be out searching again tomorrow. I haven’t yet tried any of the other recommended apps, but if any of them turn out to be equally useful, I’ll certainly let you know!

Today’s Covid-19 No, I’m not crying, you’re crying moment concerns a fundraiser for the Navajo and Hopi people, who are being harshly affected by the virus. It seems that back in 1847 the Choctaw Nation heard about the Irish Famine, and having suffered terribly themselves, were moved to help. They managed to raise $170, which they sent to the Irish people. Today donations are flooding into the Navajo and Hopi appeal from around the world, and many of them are coming from Ireland, with messages expressing love and thanks for the help that was sent by the Choctaw 170 years ago – if you scroll down the page you can read some of them. Sometimes I fear that humanity is doomed – but then I see something like this, and it restores my optimism.