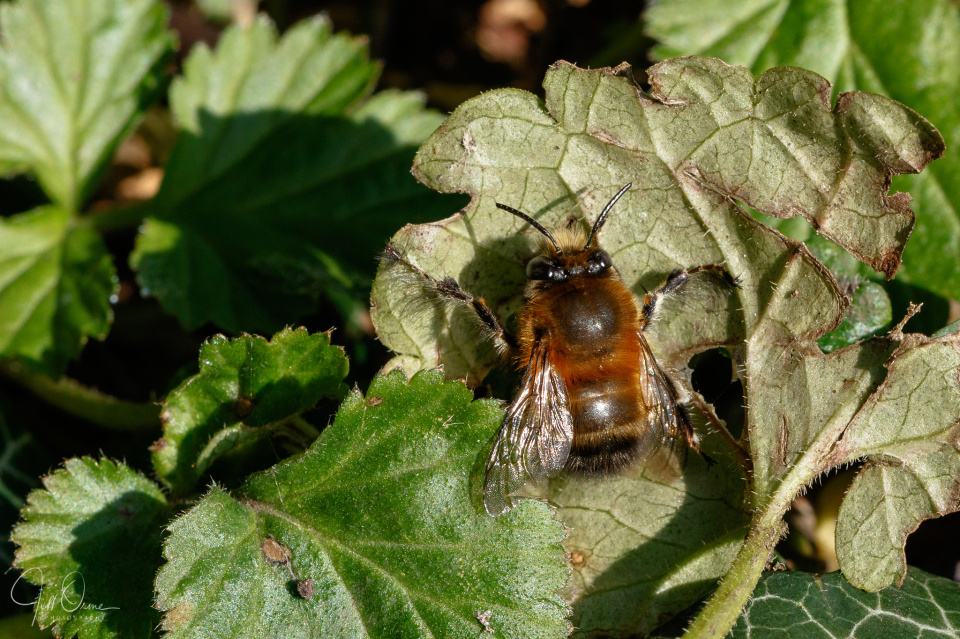 Although it was a cold day, it was brighter one than we’ve seen for the past week, and I thought it was worth wrapping up well and going out with the macro in search of invertebrates. In the event there wasn’t much around, but a plumpie always lifts the spirits – well, mine, anyway – and here is one pausing briefly on the ground ivy in the rose bed, during his otherwise relentless search for females.

I always feel sorry for these early males, because it could easily be three weeks yet before the females emerge, and by the time that happens there will be lots of other, fresher, male competition around. There always seem to be many fewer females than males, and I believe each female mates only once and then rebuffs all other suitors, so most of the males won’t get to pass on their DNA. This explains their frantic searching, and obviously a male that didn’t bother looking for mates wouldn’t be likely to find any, but even so it must surely be a matter of luck as to whether it’s this chap or one of his confrères who happens to be on the spot when a fresh and willing female breaks out of her nest cell, and thus gets to win the genetic lottery. It seems a strangely random system to me, but every year hairy-footed flower bees turn up in my garden, so I suppose it must work.

My only other significant find of the day was a buff-tailed bumblebee queen, which I stalked around the hellebores as she was feeding, and eventually managed to photograph in flight. I say that as though it’s something to be proud of, but actually she was pretty slow, partly because of her size, and partly because it was so cold. But with this winter’s owl season having been a washout, I’m very seriously out of practice at snapping anything in flight, and I was relieved to find that I hadn’t totally lost the knack – though I’ll need to polish up my skills before the Odonata season starts if I’m going to have any luck with the dragons this year. I posted one of my queen bee shots to Twitter, if you’d care to see it.