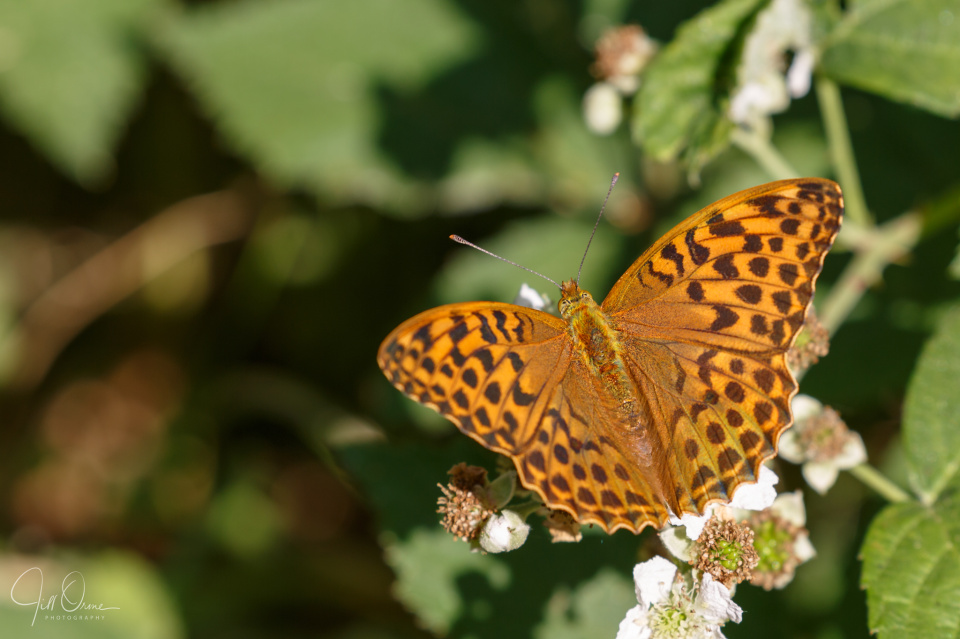 I have two offerings for you this evening – well, two plus three, really – all from an early walk this morning around Oversley Wood.

My main image is a lovely fresh female Silver-washed Fritillary, nectaring on bramble in quite a dark section of the wood, but managing to catch a shaft of sunlight that caused her to glow. You can see that she’s female by the absence of heavy bars on her forewings; in one of the other shots from this sequence she was being pestered by an amorous male, but she was more interested in food than sex, and remained aloof. This one is my favourite photo of the day.

My find of the day though, was the Purple Emperor in my extra – rather worn and battered, and browsing on an ugly patch of dusty vegetation at the side of the path, but still a big, bold tick on my species list. About ten minutes earlier I’d had the amazing experience of watching a beautiful fresh male fly several fast circles right in front of me, going in and out of a patch of light that lit the purple and scarlet of his wings in a dazzling display, and caused me to laugh aloud in delight. I tried to persuade him that he was tired and needed to land for a rest, but alas he was having none of it, and after a few seconds he disappeared at high speed into the trees. When I was sure he wasn’t coming back I walked on, still saying WOW!!! to myself, and when I met another couple of searchers around the next bend who asked the standard question, “Any luck?”, my answer was “YES!! I absolutely have had!” 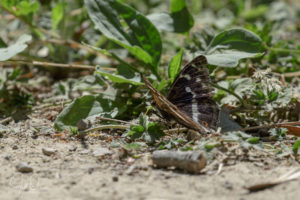 Leaving them to scurry off in hopeful pursuit of my chap, and knowing that I’d be lucky to see another Emperor today, I set off back towards the car; but then bumped into a very nice couple who do butterfly transects in Bubbenhall Wood, and who were happy to give me lots of advice about the Emperors that can be found there. We were still standing chatting, when the man suddenly said – “Oh look – here we go…” as the butterfly in my shot drifted down over our heads, flew a couple of lazy spirals, and landed on the path, where it began taking minerals. He and I both immediately began stalking it and firing off gazillions of frames, but because of its condition, and the odd light in which it had landed, neither of us could be absolutely sure if it was a male or a female. He thought he’d caught a glimpse the purple refraction that is said only to be seen in the males – and I’ve chosen this out of all my shots because it does show a slight purple tinge – but to be honest I’m still not entirely sure of the sex. Still, it’s my first Purple Emperor record – and as I said to R when recounting this triumph, once you’ve found a species for the first time, it always seems to be easier to track it down again. If you haven’t seen a Purple Emperor yourself, there’s a good page about them here.