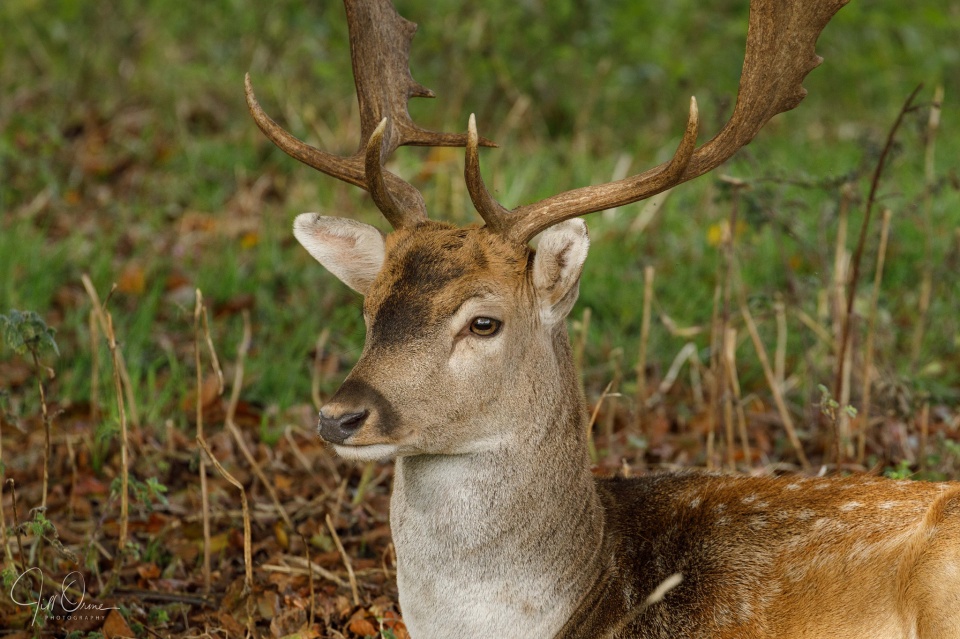 The rut hasn’t yet started at Charlecote, although some of the big old scarred bucks are doing some exploratory rounding-up of potential harems, and a bit of groaning to warm up their voices. But the does are looking unimpressed, if a tad nervous, and the fawns aren’t yet sufficiently intimidated to leave their mothers and join up into a gang. I’ll give it a few days and then go and take another look – by that time I expect things to be warming up.

This buck was lying under a tree about a hundred metres away from a group of does and fawns, keeping an eye on them. Judging from his weight and the size of his antlers he’s not yet one of the alpha males, but on the plus side that means that he’s not yet battle-scarred and is still rather handsome, which is why I’ve gone for a close-up shot rather than a full-length portrait.

The mown path went between his tree and the group of does, and he was far from relaxed about the fact that people were walking past, but he held his position even as I stopped and took several photos; but shortly after this he lost his nerve, stood up, and retreated deeper into the shade. He went to stand by a very definitely alpha buck, who was lying with his back turned towards the does, the younger males who were examining them, and the humans, looking as though he could easily sort out everyone if he chose to, but was so utterly bored with everything that was happening that he just couldn’t quite be bothered. His self-possession seemed to settle the younger male, who lay down again and relaxed; this was a nice thing to observe, but I doubt that their clubability will survive the does coming into oestrous.