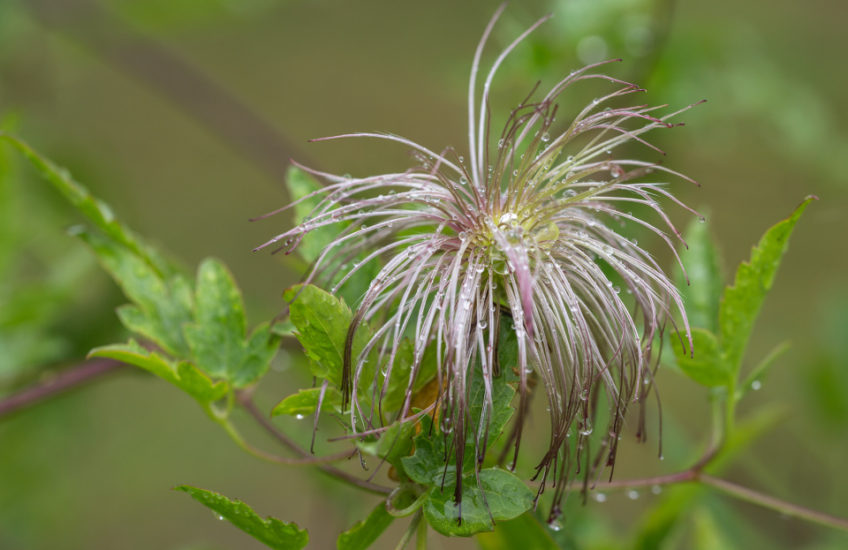 The promised rain arrived overnight, and it was wet until the middle of the afternoon. I had to go to Stratford this morning to pick up my new glasses, but other than that I skulked indoors for most of the day; I was having a grumpy day, for reasons with which I won’t bore you, and as I was hacked off anyway, I thought I might as well do a job I hate and get all the figures together for my tax return. R and I then went out for an early meal, which put me in a much sunnier mood.

I then spent the entire evening faffing about with two images of a wet clematis seed head: the first had a bizarre colour cast, and nothing I did seemed to improve it, and the second was a perfect example of the unwisdom of trying to focus stack two hand-held shots of a complex structure, taken in a strongish breeze. I’m not sure whether the fartnarkling with colour or the fartnarkling with focus was the more trying, but there did come a point at which I was almost banging my head on the desk. In the end I managed to beat them both into submission – only to look at the end results and decide that I didn’t like either of them as much as this one, which is a single shot that took about fifteen seconds to process.

Today’s Happy Top-Up-Because-It-Was-Wet Driving Music from my iPod: Hungry Heart by Bruce Springsteen (be patient with that video – it takes ages to load, but does start eventually). Back in 1990-something R and I went to see Springsteen at the NEC in Birmingham, and having booked late (by which I mean more than an hour after the booking lines opened) wound up in fantastic seats in a block at the side of the stage, which were released after the rest of the stadium sold out. It was a great gig – still a high point for me in forty years of concert-going – but as the band went off at the end I was experiencing the slight anxiety you get when there are some songs you really wanted to hear which haven’t been played, and you’re wondering if they’re going to be in the encores or not. After the usual riot of applause the E-Street Band came back on; the applause got even louder; then a chant of “Bruuuce! Bruuuce!…” started up… After about another minute Springsteen walked on, to an ear-splitting roar of approval, and as he walked through the band they started to play the intro to Hungry Heart. The roar got louder. He walked down to the front of the stage, catching a microphone thrown by someone in the band as he went, and reaching it exactly as the intro ended, held out the microphone. Several thousand people immediately stopped roaring and sang the first verse at him in perfect unison – something I don’t think I’ve ever heard before or since in a space that big. Twentyish years on, the intro to Hungry Heart still makes me grin.