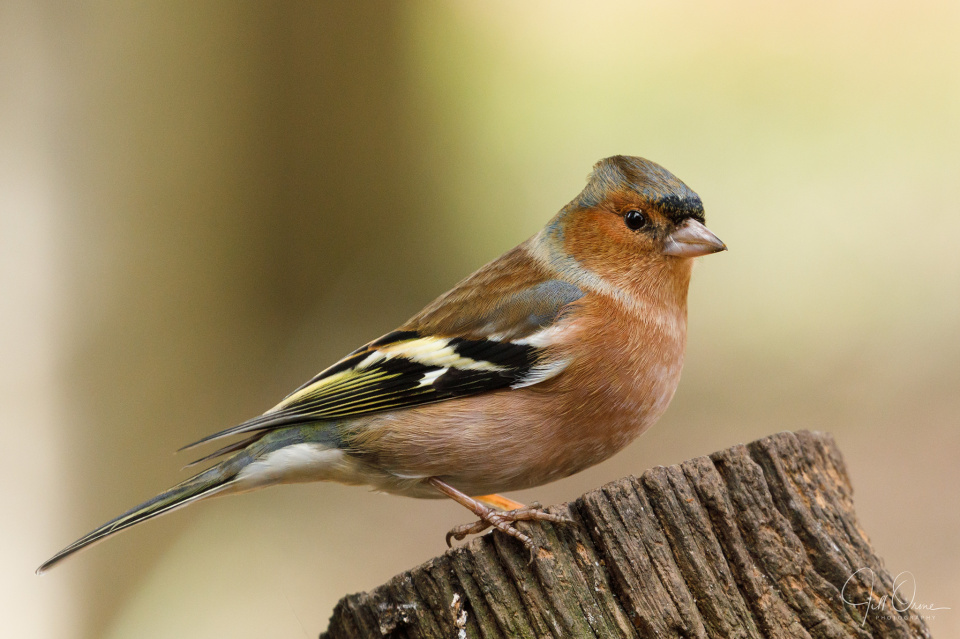 The English name ‘chaffinch’ is neatly descriptive, because this is a finch that is will search through chaff to find grain to eat. ‘Fringilla’ is the Latin word for a finch, and Linnaeus named this species ‘coelebs’, meaning single, because he observed that only the females migrated south from Sweden in the winter. This isn’t an observation we can confirm in the UK because our chaffinch population is sedentary (though we host inward migrants from northern Europe during the winter months), but females and males do often seem to flock separately outside the breeding season.

This handsome male will have moulted back in the autumn, but he’s still in the process of moving into his breeding glory because his new feathers started out with buffish tips, and it’s only when these wear away that his full colours will be revealed. If you look at this image full-screen you’ll see those buff tips quite clearly on his head and nape and the tops of his wings, which in time will be completely blue-grey. His cheeks and breast will be pink, his back chestnut brown, and his rump a strong olive green. His bill will become blue-grey as well, with a dark tip.

Having gone to all this trouble to become gorgeous enough to attract a mate, the male chaffinch seems to think that his work is largely done. The nest – a complex cup-shaped structure of moss and grass, covered with a layer of lichen and spider web and lined with feathers and fine roots – is built by the female alone, and she incubates the eggs by herself as well, though to be fair the male does help to feed the chicks after they’ve hatched. They fledge at around two weeks old, and the parents continue to feed them for another three weeks after that.

Chaffinches are prone to a disease called trichomonosis, which can be fatal, and may account for the recent sudden and potentially catastrophic decline in breeding numbers of a bird which had previously been regarded as successful. They’re also prone to developing crusty lesions on their legs, caused either by a papillomavirus or a mite (or in some cases by both simultaneously); these can be mild, but in severe cases they render the bird lame, and vulnerable to starvation or predation. I’m always sad when I see this condition, and I was happy to note that this individual has clean legs and feet.

On a different note entirely, I’m pretty chuffed to see that The Guardian has picked up on the Blipfoto climate change challenge, and has published a selection of our images, including two of mine. Amazeballs! Much kudos goes to the blipfoto marketing team, WharfedaleBex and richard, for getting this excellent publicity for the site and the blip community.